The Yes Album is the third studio album by English progressive rock band Yes, released on February 19, 1971 by Atlantic Records. It was the band’s first album to feature guitarist Steve Howe, who replaced Peter Banks in 1970, as well as their last to feature keyboardist Tony Kaye until 1983’s 90125.

The album was the first by the band not to feature any cover versions of songs. The band spent mid-1970 writing and rehearsing new material at a farmhouse at Romansleigh, Devon, and the new songs were recorded at Advision Studios in London in the autumn. While the album retained close harmony singing, Kaye’s Hammond organ, and Chris Squire’s melodic bass, as heard on earlier releases, the new material also covered further styles including jazz piano, funk, and acoustic music. All of the band members contributed ideas, and tracks were extended in length to allow music to develop. Howe contributed a variety of guitar styles, including a Portuguese guitar, and recorded the solo acoustic guitar piece “Clap”, live at the Lyceum Theatre, London.

The album was a critical success and a major commercial breakthrough for Yes, who had been at risk of being dropped by Atlantic due to the commercial failures of their first two albums. It reached number 4 in the United Kingdom and number 40 in the United States, and was later certified platinum by the Recording Industry Association of America for surpassing one million copies. The album has been reissued on CD several times, and was given a Blu-ray release in 2014 remixed by Steven Wilson. 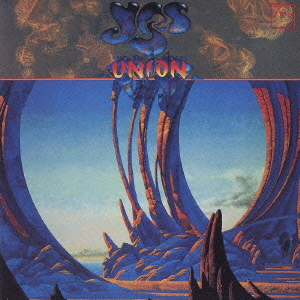 Union is the thirteenth studio album by English progressive rock band Yes, released on April 30, 1991 by Arista Records. Production began following the amalgamation of two bands featuring current and previous members of Yes at the time: Yes, consisting of Chris Squire, Trevor Rabin, Tony Kaye, and Alan White; and Anderson Bruford Wakeman Howe (ABWH), consisting of Jon Anderson, Steve Howe, Rick Wakeman, and Bill Bruford. The eight signed with Arista and a combination of tracks by both groups were selected for Union. The album was problematic from the start, including the disagreement from some members about the merge, strained internal relations during recording, and the decision by the production team to have session musicians re-record parts that Wakeman and Howe had already put down.

Union was released to a mixed critical reception and the majority of the band have openly stated their dislike of the album and its production. It reached No. 7 in the UK and No. 15 in the US. “Lift Me Up”, “Saving My Heart”, and “I Would Have Waited Forever” were released as singles; the first of which topped the Billboard Hot Mainstream Rock Tracks chart for six weeks. After two months, Union was certified gold by the Recording Industry Association of America (RIAA) for selling 500,000 copies. Howe’s guitar solo, “Masquerade”, received a Grammy Award nomination for Best Rock Instrumental Performance. Yes supported Union with their 1991–1992 world tour that featured the eight members playing on stage; Bruford, Wakeman, and Howe left the band at its conclusion.

Fragile is the fourth studio album by the English progressive rock band Yes, released in November 1971 by Atlantic Records. It was the band’s first album to feature keyboardist Rick Wakeman, who replaced founder member Tony Kaye after the group had finished touring their breakthrough record, The Yes Album.

The band entered rehearsals in London in August 1971, but Kaye’s reluctance to play electronic keyboards led to his departure from the group. He was quickly replaced by Wakeman, whose experience with the electric piano, organ, Mellotron, and Minimoog synthesizer expanded the band’s sound. Due to budget and time constraints, four tracks on the album are group compositions; the remaining five are solo pieces written by each band member. The opening track, “Roundabout”, became a popular and iconic song. The artwork for the album was the band’s first to be designed by Roger Dean, who would design many of their future covers and stage sets.

Fragile received a positive reception upon its release, and was a commercial success, reaching No. 4 on the US Billboard Top LPs chart and No. 7 on the UK Albums Chart. An edited version of “Roundabout” was released as a single in the US in January 1972, which reached No. 13. Fragile has since been certified double platinum by the Recording Industry Association of America for selling over two million copies in the US. It has been remastered several times since its release, some containing previously unreleased tracks. 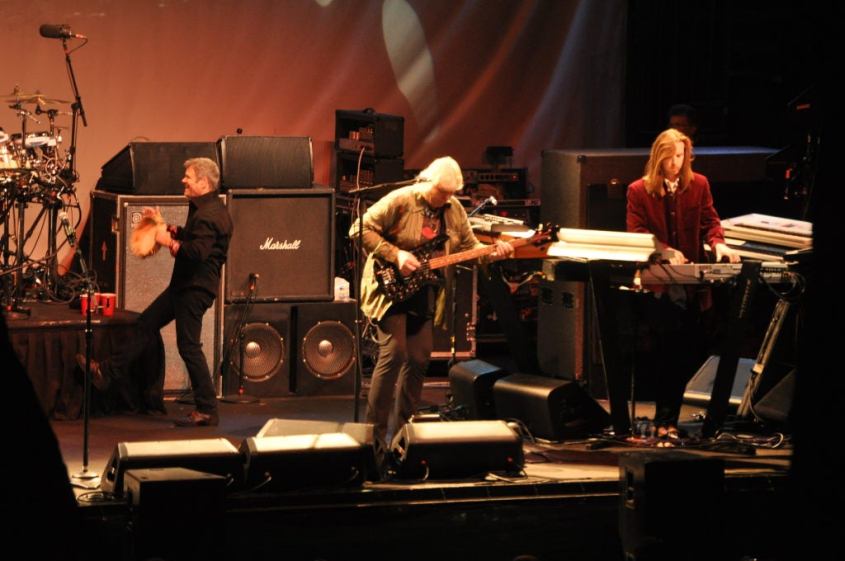 Yes began performing original songs and rearranged covers of rock, pop, blues and jazz songs, as evident on their first two albums. A change of direction in 1970 led to a series of successful progressive rock albums until their disbanding in 1981, their most successful being The Yes Album (1971), Fragile (1971) and Close to the Edge (1972). Yes toured as a major rock act that earned the band a reputation for their elaborate stage sets, light displays, and album covers designed by Roger Dean. The success of “Roundabout”, the single from Fragile, cemented their popularity across the decade and beyond.

In 1983, Yes reformed with a new line-up that included Trevor Rabin and a more commercial and pop-oriented musical direction. The result was 90125 (1983), their highest-selling album, which contained the U.S. number-one single, “Owner of a Lonely Heart”. From 1990 to 1992, Yes were an eight-member formation after they merged with Anderson Bruford Wakeman Howe for Union (1991) and its tour. Since 1994, Yes have released albums with varied levels of success and completed tours from 1994 to 2004. After a four-year hiatus, they resumed touring in 2009 and continue to release albums; their most recent is Heaven & Earth (2014). In 2016, a new group of former Yes members began touring and named themselves Yes Featuring Jon Anderson, Trevor Rabin, Rick Wakeman.

Yes are one of the most successful, influential, and longest-lasting progressive rock bands. They have sold 13.5 million RIAA-certified albums in the US. In 1985, they won a Grammy Award for Best Rock Instrumental Performance with “Cinema”, and received five Grammy nominations between 1985 and 1992. They were ranked No. 94 on VH1’s 100 Greatest Artists of Hard Rock. Yes have headlined annual progressive rock-themed cruises since 2013 named Cruise to the Edge. Their discography spans 21 studio albums. In April 2017, Yes were inducted into the Rock and Roll Hall of Fame, which chose specifically to bestow the honour upon current and former members Anderson, Squire, Bruford, Kaye, Howe, Wakeman, White and Rabin. 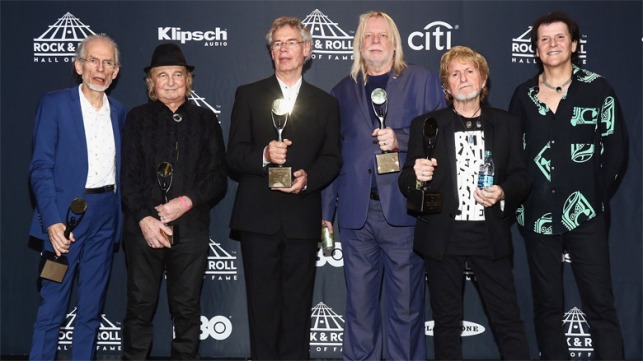 Christopher Russell Edward Squire (March 4, 1948 – June 27, 2015) was an English musician, singer and songwriter best known as the bassist and a founding member of the progressive rock band Yes. He was the longest-serving original member, having remained in the band until his death and appearing on every studio album released from 1969 to 2014.

Stephen James Howe (April 8, 1947) is an English musician, songwriter and producer, best known as the guitarist in the progressive rock band Yes across three stints since 1970.

Alan White (born June 14, 1949) is an English drummer and songwriter best known for his tenure in the progressive rock band Yes, which he joined in 1972.

John Roy Anderson (born October 25, 1944), known professionally as Jon Anderson, is an English singer and songwriter, best known as the lead singer of the progressive rock band Yes, which he co-founded in 1968 with bassist Chris Squire. He was a member of the band across three tenures between 1968 and 2008. Anderson is a current member of Yes Featuring Jon Anderson, Trevor Rabin, Rick Wakeman.

Peter William Brockbanks (July 15, 1947 – March 7, 2013), known professionally as Peter Banks, was an English guitarist, vocalist, songwriter and producer. He was best known as the original guitarist in the rock bands the Syn, Yes, Flash, and Empire.

Richard Christopher Wakeman (born May 18, 1949) is an English keyboardist, songwriter, producer, television and radio presenter, and author. He is best known for being in the progressive rock band Yes across five tenures between 1971 and 2004 and for his solo albums released in the 1970s. He is a current member of Yes Featuring Jon Anderson, Trevor Rabin, Rick Wakeman.

Yes Featuring Jon Anderson, Trevor Rabin, Rick Wakeman, variously also known as Anderson, Rabin and Wakeman (ARW), are a progressive rock band founded by former Yes members Jon Anderson (vocals, acoustic guitar), Trevor Rabin (guitar, vocals) and Rick Wakeman (keyboards) in an offshoot of the band. The three had previously worked together in Yes for the 1991–1992 Union Tour. The trio were first announced as working together in 2010.

After working on new music since 2011, the band announced activity in January 2016 as Anderson, Rabin and Wakeman. Plans for a possible studio album were put on hold to concentrate on touring; their debut worldwide tour, An Evening of Yes Music and More, began in October 2016 and continued through to 2017, with bassist Lee Pomeroy and drummer Lou Molino III. In April 2017, following the three members being inducted into the Rock and Roll Hall of Fame as part of Yes, the band announced their new name, which they had already been using in European touring.

After the conclusion of a 50th anniversary tour in 2018, the band went on hiatus. Wakeman later announced they would play a final tour in 2020-1, with their name reverting to ARW.