Wings over America is a triple live album by the British–American rock band Wings, released in December 1976. The album was recorded during the American leg of the band’s 1975–76 Wings Over the World tour. It peaked at number 8 on the UK Albums Chart and reached number 1 on the US Billboard Top LPs & Tape chart.

In addition to including several of McCartney’s hits with Wings, the album features performances of five Beatles songs: “Yesterday”, “Lady Madonna”, “I’ve Just Seen a Face”, “Blackbird” and “The Long and Winding Road”. The album cover was designed by Hipgnosis – who were nominated in 1978, together with McCartney’s production company MPL, for a Grammy Award for Best Album Package for this album – and depicts an airliner about to open its cabin door. Wings over America was remastered and reissued in May 2013. 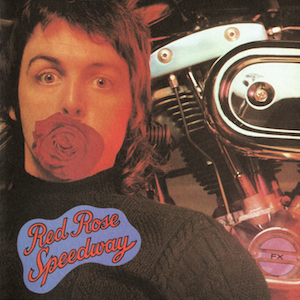 Red Rose Speedway is the second studio album by Paul McCartney and Wings. The album was released in 1973 after the relatively weak commercial performance of Wings’ previous album, Wild Life. Red Rose Speedway reached No. 1 on the Billboard 200 chart in the United States and “My Love” was a No. 1 single in the US and the most popular track from the album.

On 18 October 2018, it was officially announced the release on 7 December 2018 of the album reissues of Wild Life and Red Rose Speedway as part of the Paul McCartney Archive Collection series. These album reissues will be published in several editions:

Special Edition 2-CD; the original 9-track album on the first disc, include previously unreleased recordings and non-album singles on a second disc;

Deluxe Edition 3-CD/2-DVD/1-Blu-Ray; the original 9-track album on the first disc, original “double” album on a second disc; previously unreleased recordings and non-album singles on a three disc; DVD includes music videos, the “James Paul McCartney” TV show, “Live And Let Die” in Liverpool and The Bruce McMouse Show with 5.1 format, as well as on Blu-Ray.

Double Album 2-LP; originally conceived version of the album, although it was ultimately simplified to a single plate. Includes reconstructed album version based on original acetates and master tape, as well as a link to download materials.

Sir James Paul McCartney CH MBE (born 18 June 1942) is an English singer-songwriter, multi-instrumentalist, and composer. He gained worldwide fame as the bass guitarist and singer for the rock band the Beatles, widely considered the most popular and influential group in the history of pop music. His songwriting partnership with John Lennon was the most successful of the post-war era. After the group disbanded in 1970, he pursued a solo career and formed the band Wings with his first wife, Linda, and Denny Laine.

McCartney is one of the most successful composers and performers of all time. More than 2,200 artists have covered his Beatles song “Yesterday”, making it one of the most covered songs in popular music history. Wings’ 1977 release “Mull of Kintyre” is one of the all-time best-selling singles in the UK. A two-time inductee into the Rock and Roll Hall of Fame (as a member of the Beatles in 1988, and as a solo artist in 1999), and an 18-time Grammy Award winner, McCartney has written, or co-written, 32 songs that have reached number one on the Billboard Hot 100, and as of 2009 he has 25.5 million RIAA-certified units in the United States. McCartney, Lennon, George Harrison and Ringo Starr all received appointment as Members of the Order of the British Empire in 1965 and, in 1997, McCartney was knighted for services to music. McCartney is also one of the wealthiest musicians in the world, with an estimated net worth of US$1.2 billion.

McCartney has released an extensive catalogue of songs as a solo artist and has composed classical and electronic music. He has taken part in projects to promote international charities related to such subjects as animal rights, seal hunting, land mines, vegetarianism, poverty, and music education. He has married three times and is the father of five children. – Wikipedia