As we prepare to wrap up the Thanksgiving Day Weekend, this evening on “Great Soul Performances 2: The 80s,” I’ll be presenting songs by: Luther Vandross, Gloria Estefan & Miami Sound Machine, Richard “Dimples” Fields, Tierra, Ray, Goodman & Brown, Phoebe Snow, the Pointer Sisters, Tavares, New Edition, tracks by two of my former co-workers at WWRL in New York City; Gerry Bledsoe with the Fatback Band, and Gary Imhotep Byrd with his G.B.E., plus a lot more. It begins at 7PM ET, 6PM CT, 5PM MT & 4PM PT for yours truly and “Great Soul Performances 2: The 80s” on RadioMaxMusic.Com. 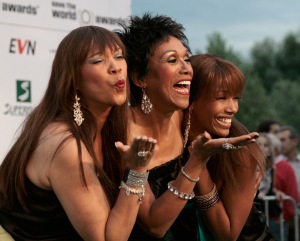 The Pointer Sisters are an American R&B recording girl group from Oakland, California that achieved mainstream success during the 1970s and 1980s. Spanning over three decades, their repertoire has included such diverse genres as pop, disco, jazz, electronic music, bebop, blues, soul, funk, dance, country and rock. The Pointer Sisters have won three Grammy Awards and received a star on the Hollywood Walk of Fame in 1994. The group had 13 US top 20 hits between 1973 and 1985.

The group had its early origins when sisters June and Bonnie Pointer began performing in clubs in 1969 as “Pointers, a Pair”. The line-up grew to a trio when sister Anita Pointer joined them. They scored a record deal with Atlantic Records and released several unsuccessful singles. The trio grew to a quartet when sister Ruth joined in December 1972. They then signed with Blue Thumb Records, recorded their debut album, and began seeing more success, winning a Grammy Award in 1975 for Best Country Vocal Performance for “Fairytale” (1974). Bonnie left the group in 1978 to commence a solo career with only modest success.