William “Smokey” Robinson Jr. (born February 19, 1940) is an American singer, songwriter, record producer, and former record executive. Robinson was the founder and frontman of the Motown vocal group the Miracles, for which he was also chief songwriter and producer. Robinson led the group from its 1955 origins as “the Five Chimes” until 1972, when he announced a retirement from the group to focus on his role as Motown’s vice president. However, Robinson returned to the music industry as a solo artist the following year. Following the sale of Motown Records in 1988, Robinson left the company in 1990.

Robinson was inducted into the Rock and Roll Hall of Fame in 1987, and was awarded the 2016 Library of Congress Gershwin Prize for his lifetime contributions to popular music.

Join me later for fantastic music as you recuperate from “Black Friday” for “G.S.P.” and “G.S.P. 2:The 80s” on RadioMaxMusic.Com., and of course, encore time tomorrow Sunday is at 5PM Eastern Time just ahead of “Cyber Monday.” May The Soul Roll On!

William “Smokey” Robinson Jr. (born February 19, 1940) is an American singer, songwriter, record producer, and former record executive. Robinson was the founder and front man of the Motown vocal group the Miracles, for which he also served as the group’s chief songwriter and producer. Robinson led the group from its 1955 origins as the Five Chimes until 1972 when he announced a retirement from the group to focus on his role as Motown’s vice president.

However, Robinson returned to the music industry as a solo artist the following year. Following the sale of Motown Records in 1988, Robinson left the company in 1990. He was inducted into the Rock and Roll Hall of Fame in 1987. Robinson was awarded the 2016 Library of Congress Gershwin Prize for his lifetime contributions to popular music. – Wikipedia

When I see you this evening for “Great Soul Performances 2: The 80s,” joining me will be: Rick James, Smokey Robinson, the Masqueraders, Johnny Mathis, Ray Parker Jr., & Raydio, Whitney Houston, the Dells, Patrice Rushen, the Stylistics, Luther Vandross and others. I’ll look for you at 6PM ET, 5PM CT, 4PM MT & 3PM PT for “Great Soul Performances 2: The 80s” where it’s all good, RadioMaxMusic.Com.

This afternoon on “Great Soul Performances 2: The 80’s,” you’ll hear: Luther Vandross, the Whispers, Skyy, Peaches and Herb, the Commodores, James Brown, Smokey Robinson, the Temptations, War, Atlantic Starr and a bunch of other fantastic songs. We’ll kick it off at 5PM ET, 4PM CT, 3PM MT & 2PM PT. Well you’re welcome, stop on by for “Great Soul Performances 2: The 80’s” on the best station on the internet, RadioMaxMusic.com.  Check the program schedule for additional encore presentations.

Sheryl Suzanne Crow (born February 11, 1962) is an American musician and actress. Her music incorporates elements of pop, rock, folk, country and blues. She has released eight studio albums, two compilations, a live album and has contributed to a number of film soundtracks. She has sold more than 17 million albums in the US and over 50 million albums worldwide. Additionally, Crow has garnered nine Grammy Awards (out of 32 nominations) from the National Academy of Recording Arts and Sciences.

As an actress, Crow has appeared on various television shows including 30 Rock, GCB, Cougar Town, Jon Stewart and Stephen Colbert’s Rally to Restore Sanity and/or Fear, as well as One Tree Hill. – Wikipedia

This evening on “Great Soul Performances,” on tap I’ve got: Jackie Wilson, the Chi-Lites, Stevie Wonder, the Miracles, the “jazzy” side of Smokey Robinson, Tower Of Power, the Beginning Of The End, Blue Magic, the Isley Brothers, Billy Stewart and Sam & Dave “live in concert,” plus many others. We’ll start at 7PM ET, 6PM CT, 5PM MT & 4PM PT. Don’t forget the encore performances on Monday at 10PM and Wednesday at 12Noon; all start times are eastern daylight saving times. So join me later for “Great Soul Performances” on RadioMaxMusic.com. – Bobby Jay 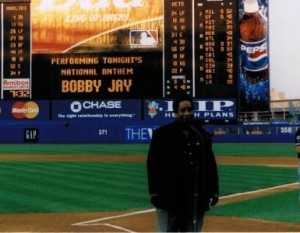 Would you believe, it’s the first Saturday of Spring? Well to commemorate the beginning of Spring, on “Great Soul Performances” this evening you’ll be entertained by Smokey Robinson & the Miracles, Cliff Perkins & Soul Generation, Edwin Starr, Sam Cooke, the Moments, Bill Cosby, Eugene Pitt (“Steppin’ Out In Front”), Little Anthony & the Imperials, the Charts, Eddie Kendricks, and the Jacksons “live in concert,” plus many more. I’ll be looking for you at 7PM ET, (following an encore performance of “Great Soul Performances 2: The 80’s”) 6PM CT, 5PM MT & 4PM PT. If you miss it, you can check out the encore performances on Monday at 10p or Wednesday at 12p (all times eastern daylight saving time) and it all happens on RadioMaxMusic.com. See Ya Later Gator!

James started his singing career fronting doo-wop and rhythm and blues bands in his hometown of Buffalo, New York in the early 1960s, with his vocal style influenced by the likes of Marvin Gaye, Smokey Robinson and David Ruffin. After entering the United States Navy to avoid conscription after he dropped out of high school, James deserted and relocated to Toronto, Canada where he resumed his music career. While there, James formed the rock-soul fusion band Mynah Birds, whose lineup once included a young Neil Young. James’ tenure with the Mynah Birds was interrupted after he was discovered recording with the group in Motown in the 1960s, and surrendered to military authorities serving out a one-year sentence in a prison in Buffalo. James returned to Canada where he resumed the Mynah Birds, though the band eventually split; James relocated to California where he started a series of rock bands. He also had a period where he served as a staff writer with Motown (under an assumed name) before he left the label.

In 1977, he signed with the Gordy Records subsidiary of Motown as a recording artist where in 1978, he recorded his first album, Come Get It!, which sold over a million copies at the time of its release. He would go on to score several popular hits on the pop and R&B charts, including four number-one hits on the latter chart. James became noted not only as a hit maker on his own recordings but also produced successful recordings for the likes of Teena Marie, the Mary Jane Girls, the Temptations, Eddie Murphy and Smokey Robinson. His best-selling recording, 1981’s Street Songs, sold over three million copies helping to renew sagging fortunes in Motown.

Addictions to cocaine and crack however hampered his career by the late 1980s and in the 1990s, his legal troubles, which would include assaulting two women while under the influence of crack, led him to serve a three-year prison sentence at California’s Folsom State Prison. James was released on parole in 1996 and resumed his musical career releasing the album, Urban Rapsody, in 1997. A mild stroke suffered during a concert in early 1998 interrupted his career for a brief time. James received new notoriety in 2004 when he appeared on an episode of Dave Chappelle’s Chappelle Show in the Charlie Murphy “True Hollywood Stories” segment of the show, in which James’ past wild lifestyle was satirized. James died later that year from heart failure at the age of 56.  (Source: Wikipedia)

Mary Esther Wells (May 13, 1943 – July 26, 1992) was an American singer who helped to define the emerging sound of Motown in the early 1960s. Along with The Miracles, The Temptations, The Supremes, and the Four Tops, Wells was said to have been part of the charge in black music onto radio stations and record shelves of mainstream America, “bridging the color lines in music at the time.”

With a string of hit singles composed mainly by Smokey Robinson, including “Two Lovers” (1962), the Grammy-nominated “You Beat Me to the Punch” (1962) and her signature hit, “My Guy” (1964), she became recognized as “The Queen of Motown” until her departure from the company in 1964, at the height of her popularity. She was one of Motown’s first singing superstars. (Source: Wikipedia)

Later this evening on “Great Soul Performances,” you’ll hear the Spinners, the Impressions, James Brown, Alicia Keys, Donnie Hathaway, the Intruders, Joe Tex, James Brown, the Four Tops and for the third straight week, we’ve got tributes to pay. I’ll be saluting the late Bobby Rogers of the Miracles and the late Jewel Akens. So join me at 7PM ET on RadioMaxMusic.Com.