Richard Lewis Springthorpe (born August 23, 1949), known professionally as Rick Springfield, is an Australian-American musician and actor. He was a member of the pop rock group Zoot from 1969 to 1971, then started his solo career with his debut single, “Speak to the Sky”, which reached the top 10 in Australia in mid-1972. When he moved to the United States, he had a No. 1 hit with “Jessie’s Girl” in 1981 in both Australia and the US, for which he received the Grammy Award for Best Male Rock Vocal Performance. He followed with four more top 10 US hits: “I’ve Done Everything for You”, “Don’t Talk to Strangers”, “Affair of the Heart” and “Love Somebody”. Springfield’s two US top 10 albums are Working Class Dog (1981) and Success Hasn’t Spoiled Me Yet (1982).

As an actor, Springfield starred in the movie Hard to Hold in 1984 and the television series High Tide from 1994 to 1997. He appeared in supporting roles in Ricki and the Flash and True Detective (both 2015). He portrayed Dr Noah Drake on the daytime drama General Hospital (1981–83, 2005–08, 2012), returning in 2013 for the show’s 50th anniversary with his son, actor Liam Springthorpe. He played a depraved version of himself in Californication (2009). In 2010, Springfield published his autobiography, Late, Late at Night: A Memoir. In 2016 he starred as Vince Vincente/Lucifer in season 12 of The CW series Supernatural. In 2012, he starred as himself in the TV show Hot in Cleveland episode 16 of season 3 titled “Everything Goes Better With Vampires”. In 2017, he starred as Pastor Charles in the American Horror Story episode entitled “Winter of Our Discontent”.

Playlist: The Very Best Of Rick Springfield is a compilation album by Rick Springfield, released by RCA Records on June 17, 2008. This collection was originally released with the title We Are the ’80s in 2006 but was re-released with the “Playlist” title in 2008, containing the same songs and running order. Both are essentially an upgrade to Springfield’s similar Greatest Hits (1989), adding two additional tracks.

Springfield began his recording career in the late 1960s and had limited success in the United States with his 1972 album Beginnings and its single “Speak to the Sky.” He released three more albums through 1976, but his musical career would not take off in earnest until 1981 with the release of his first RCA album Working Class Dog. The single “Jessie’s Girl” from that album gave Springfield his first and only number one single in the U.S., and won him a Grammy Award for Best Rock Vocal Performance, Male.

Springfield’s success continued throughout the 1980s with albums such as Success Hasn’t Spoiled Me Yet (1982) that contained the singles “Don’t Talk to Strangers” and “What Kind of Fool Am I”, and 1983’s Living in Oz with the hits “Affair of the Heart” and “Human Touch”. Rick Springfield starred in the 1984 film Hard to Hold and the accompanying soundtrack album included his songs “Love Somebody” and “Don’t Walk Away.” In the mid-1980s, Springfield stated that he started dealing with serious spiritual issues and he began to write more about those in his music. His 1985 release Tao with the singles “State of the Heart” and “Celebrate Youth” saw Rick moving in a more mature and spiritual direction. His 1988 album Rock of Life would be his last album of new material until 1997’s Sahara Snow, and contained Springfield’s final (of 17) Billboard Top 40 single in the USA.

This compilation contains the majority of Springfield’s hit singles from 1981 to 1988, by far his most successful years. The only Billboard Hot 100 charting singles from the 1980s not included are “Souls”, “Taxi Dancing,” and “Bruce.”

Australian rock music singer, Rick Springfield consists of 22 studio albums, 12 compilation albums, five live albums, 34 singles and 11 music videos. In 1995, Springfield formed a side-project, Sahara Snow, with Tim Pierce on guitar and Bob Marlette on keyboards and percussion, which released a self-titled studio album in 1997. In 2021, he formed a similar side project with The Red Locusts. 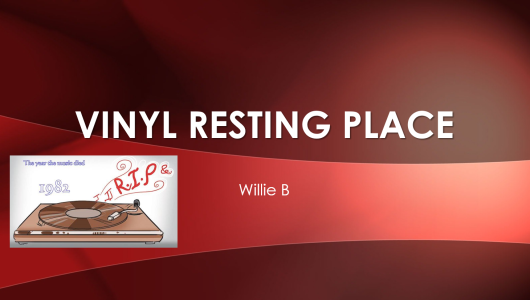 Today on a new installment of the Vinyl Resting Place –  the first full year of MTV and the last year for rock and roll.  We count down the top 45 (well – almost) 45’s of 1982.  Today’s twist – we count up – from #1 to – well – as close as we can get to 45… here’s  a sampling of what they were listening to in 1982….Joan Jett & The Blackhearts, Paul McCartney, Survivor, J. Geils Band, Daryl Hall & John Oates, Toni Basil, Journey, Rick Springfield, Laura Branigan, Quarterflash, Stevie Wonder, Cars, Neil Diamond, Air Supply and so many more . . .  Join Willie B today at 12pm and check the schedule for encore times.