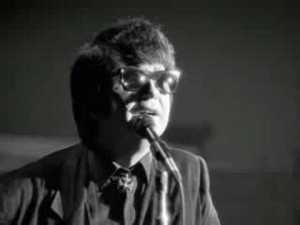 Born and raised in Texas, Orbison got his start in a rockabilly band in high school. He broke into professional music under Sam Phillips at Sun Records, but found only marginal success there. After a couple years writing for other musicians, Orbison recorded several songs at Monument Records under producer Fred Foster. With Foster, Orbison and songwriter Joe Melson tailored many of Orbison’s songs for his unique voice; his most popular songs were dramatic ballads ending with emotional crescendos that showcased his powerful vocals. After his biggest hit in 1964, “Oh, Pretty Woman“, Orbison continued to record, but not until 1987 did he find the success he had once known when his single “In Dreams” was used in David Lynch’s film Blue Velvet. The next year, Orbison recorded with the supergroup Traveling Wilburys alongside Bob Dylan, Tom Petty, Jeff Lynne, and George Harrison. Lynne produced Orbison’s final album Mystery Girl, which was released posthumously in February of 1989.