Massachusetts, officially the Commonwealth of Massachusetts, is the most populous state in the New England region of the northeastern United States. It is bordered by the Atlantic Ocean to the east, the states of Connecticut and Rhode Island to the south, New Hampshire and Vermont to the north, and New York to the west. The state is named after the Massachusett tribe, which once inhabited the east side of the area, and is one of the original thirteen states. The capital of Massachusetts is Boston, which is also the most populous city in New England. Over 80% of Massachusetts’s population lives in the Greater Boston metropolitan area, a region influential upon American history, academia, and industry. Originally dependent on agriculture, fishing and trade, Massachusetts was transformed into a manufacturing center during the Industrial Revolution. During the 20th century, Massachusetts’s economy shifted from manufacturing to services. Modern Massachusetts is a global leader in biotechnology, engineering, higher education, finance, and maritime trade.

Plymouth was the site of the first colony in New England, founded in 1620 by the Pilgrims, passengers of the Mayflower. In 1692, the town of Salem and surrounding areas experienced one of America’s most infamous cases of mass hysteria, the Salem witch trials. In 1777, General Henry Knox founded the Springfield Armory, which during the Industrial Revolution catalyzed numerous important technological advances, including interchangeable parts. In 1786, Shays’ Rebellion, a populist revolt led by disaffected American Revolutionary War veterans, influenced the United States Constitutional Convention. In the 18th century, the Protestant First Great Awakening, which swept the Atlantic World, originated from the pulpit of Northampton preacher Jonathan Edwards. In the late 18th century, Boston became known as the “Cradle of Liberty” for the agitation there that led to the American Revolution.

The entire Commonwealth of Massachusetts has played a powerful commercial and cultural role in the history of the United States. Before the American Civil War, Massachusetts was a center for the abolitionist, temperance, and transcendentalist movements. In the late 19th century, the sports of basketball and volleyball were invented in the western Massachusetts cities of Springfield and Holyoke, respectively. In 2004, Massachusetts became the first U.S. state to legally recognize same-sex marriage as a result of the decision in Goodridge v. Department of Public Health by the Massachusetts Supreme Judicial Court. Many prominent American political dynasties have hailed from the state, including the Adams and Kennedy families. Harvard University in Cambridge is the oldest institution of higher learning in the United States, with the largest financial endowment of any university, and Harvard Law School has educated a contemporaneous majority of Justices of the Supreme Court of the United States. Kendall Square in Cambridge has been called “the most innovative square mile on the planet”, in reference to the high concentration of entrepreneurial start-ups and quality of innovation which have emerged in the vicinity of the square since 2010. Both Harvard University and the Massachusetts Institute of Technology, also in Cambridge, have been ranked among the most highly regarded academic institutions in the world. Massachusetts’ public school students place among the top nations in the world in academic performance,and the state has been ranked as one of the top states in the nation for citizens to live, as well as one of the most expensive. – Wikipedia

When we come your way this evening for “Great Soul Performances 2: The 80’s,” from the fairgrounds of “The Big E” in West Springfield, Massachusetts, on the playlist will be: New Edition, Hall & Oates, Gloria Gaynor, AWB, Grover Washington, Jr. & Bill Withers, the Gap Band, Kenny Loggins, Evelyn “Champagne” King, Elton John, the Whispers and others. The fun starts at 7PM ET, 6PM CT, 5PM MT and 4PM PT. I’ll be looking for your face, in the place for “G.S.P. 2: The 80’s,” only on RadioMaxMusic.com. 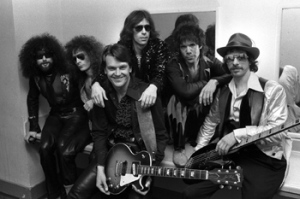 The J. Geils Band is an American rock band formed in 1967 in Worcester, Massachusetts. The band played R&B-influenced blues-rock in the 1970s before moving towards a more New Wave sound in the 1980s. Since its initial break-up in 1985, the band has reunited several times. Their biggest hit was their 1981 single, “Centerfold”, which charted #1 in the United States in early 1982.

Peter Wolf (born Peter W. Blankfield; March 7, 1946) is an American rhythm and blues, soul and rock and roll musician, best known as the lead vocalist for the J. Geils Band from 1967 to 1983; and for a successful solo career with writing partner Will Jennings.

Richard “Magic Dick” Salwitz (born May 13, 1945) is an American musician, and the harmonica player for The J. Geils Band. In addition to the harmonica, Salwitz plays the trumpet (the first instrument he learned) and saxophone. 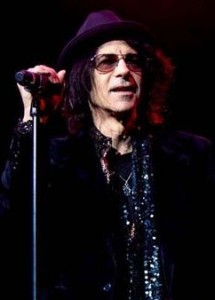 Seth Justman (born January 27, 1951, Washington, D.C.) is the keyboard player for the U.S. rock band, The J. Geils Band. He co-wrote many of the band’s songs with singer Peter Wolf, and took sole songwriting credits for the band’s biggest international hit, “Centerfold” (#1 for six weeks on the Billboard Hot 100). Justman also became the band’s main vocalist once Wolf left the J. Geils Band in 1983 until the band’s first break-up in 1985. In 1986 Justman produced and partly co-wrote Rockbird, the second solo album by Debbie Harry. Seth is the brother of Paul Justman, director of the 2002 movie, Standing in the Shadows of Motown. Paul and Seth shared songwriting credits for most of the songs on J. Geils Band’s 1984 album, You’re Gettin’ Even While I’m Gettin’ Odd, which was also the one album featuring Seth on lead vocals.

John W. Geils Jr. (born February 20, 1946, New York City, New York) popularly known as J. Geils, is an American blues-rock lead guitarist, singer and founder of The J. Geils Band; he has also recorded with several jazz musicians. Born in New York, he grew up in Far Hills, New Jersey where he graduated from Bernards High School. He moved to Massachusetts in 1964 and studied engineering at Northeastern University and Worcester Polytechnic Institute. – Wikipedia