Best of the ‘B’ Sides is a compilation of B-sides by the British heavy metal band Iron Maiden, released on November 4, 2002 as part of the Eddie’s Archive box set. Each track was remastered and the set came with a running commentary from Rod Smallwood. It covers all of their singles from their first (1980’s “Running Free”) to 2000’s “Out of the Silent Planet”, although several of the band’s original B-sides were excluded from the collection: “Total Eclipse” (from “Run to the Hills”, 1982, although this has been added to the album The Number of the Beast from 1998 onwards), “Mission From ‘Arry” (from “2 Minutes to Midnight”, 1984); “Bayswater Ain’t a Bad Place to Be” (from “Be Quick or Be Dead”, 1992); and “I Live My Way” (from “Man on the Edge”, 1995). Also missing are the band’s cover of Thin Lizzy’s “Massacre” (from “Can I Play with Madness”, 1988) and a number of live B-sides.

The album is described on the band’s website as “a collection that not only reveals much about the band as individuals and the inherent character of the band, but also provides a real insight into who and where their influences came from.”

Senjutsu is the band’s first studio album in nearly six years, following The Book of Souls (2015), marking the longest gap between two Iron Maiden studio albums. This is also their second studio double album, and their first studio album since Powerslave (1984) to have no songwriting contributions from guitarist Dave Murray in any way, as well as the first since Virtual XI (1998) to feature multiple songs written by bassist Steve Harris alone.

The name of the album is rendered on the right side of the cover art by the actual vertical Japanese spelling of “senjutsu” (戦術), and on the left side by a font reminiscent of Japanese characters. 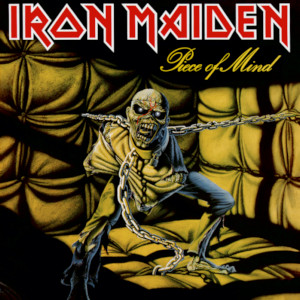 Piece of Mind is the fourth studio album by English heavy metal band Iron Maiden. It was released on May 16, 1983 in the United Kingdom by EMI Records and in the United States by Capitol Records. It was the first album to feature drummer Nicko McBrain, who had recently left the band Trust and has been Iron Maiden’s drummer ever since.

Piece of Mind was a critical and commercial success, reaching number three on the UK Albums Chart and achieving platinum certification in the UK and North America. 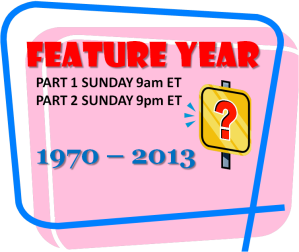 January 10 – A revival of the Gilbert and Sullivan operetta The Pirates of Penzance opens at Broadway’s Uris Theatre, starring Linda Ronstadt and Rex Smith.
January 24 – Aerosmith lead singer Steven Tyler is injured in a motorcycle crash that leaves him hospitalized for two months.
February 14 – Billy Idol leaves the band Generation X to begin a solo career.
March 14 – Suffering from bleeding ulcers, Eric Clapton is admitted to United Hospital in Saint Paul, Minnesota. Clapton’s 60-city tour of the US is cancelled, and he remains in hospital for a month.
April 1 – The Go-Go’s sign to IRS Records.
April 4 – British pop group Bucks Fizz wins the 26th Eurovision Song Contest, held at the RDS Simmonscourt Pavilion, Dublin, with the song “Making Your Mind Up”.
April 11 – Van Halen’s lead guitarist Eddie Van Halen marries actress Valerie Bertinelli.
April 18 – Yes announce that they are breaking up. (They would reunite frequently in years to come).
April 20 – The Mamas & the Papas’ John Phillips is sentenced to five years in jail after pleading guilty to drug possession charges. Phillips’ sentence would be suspended after thirty days in exchange for 250 hours of community service.
April 22 – Eric Clapton is taken to the hospital suffering from bruised ribs and a lacerated shin, following a car accident in Seattle, Washington.
April 27 – Ringo Starr and Barbara Bach marry, in London, England.
May 2 – British vocalist Sheena Easton hits No. 1 in the US with “Morning Train (9 to 5)” following a swift rise to fame as the result of a reality TV show.
May 14 – Diana Ross signs with RCA Records (EMI internationally), leaving Motown Records, her label of two decades. The $20,000,000 deal is the most lucrative recording contract in history at that time.
March 14 — The final showing of Live From The Grand Ole Opry on the Public Broadcasting System (PBS) occurs on this night. The show actually went beyond the televised segment, but the show was ended with a clip of Marty Robbins singing “El Paso” (a song he used to close out his Opry segment at midnight) from the year before. Because of cost over-runs and other technicalities, this was the final run for the annual show on PBS that featured the music of Tom T. Hall, Del Reeves, Hank Snow, Roy Acuff and Minnie Pearl, and many other performers.
May 15 – A riot breaks out at The Ritz rock club in New York when Public Image Ltd plays behind a videoscreen while completely different music plays over the club’s speakers.
June 4 – U2 appears on the Tomorrow show with Tom Snyder, their first U.S. television appearance.
June 5 – The TV series Night Flight, a variety show featuring music documentaries and videos, premieres on the USA Network.
June 6 – Kerrang! magazine publishes its first issue. Angus Young of AC/DC is on the cover.
June 30 – Jerry Lee Lewis is rushed to hospital in Memphis for emergency surgery for a tear in his stomach. Despite being given less than a 50% chance of survival, he eventually pulls through.
August 1 – MTV debuts on cable television in the United States, playing music videos 24 hours a day.
August – the success of Stars On 45 leads to a short-lived medley craze. The most successful imitator of the Stars On 45 format is, rather unexpectedly, the Royal Philharmonic Orchestra whose “Hooked On Classics (Parts 1&2)” reaches number two in the charts.
August 23 – The Violent Femmes are discovered by members of The Pretenders busking outside a Milwaukee venue and are invited to play a 10-minute acoustic set as a second opening act in the Pretenders’ show that night.
September 19 – Simon & Garfunkel perform a free reunion concert in New York City’s Central Park attended by over 500,000 fans.
September 25 – The Rolling Stones open their US tour in Philadelphia, Pennsylvania.
October 26 – Iron Maiden plays its first show with Bruce Dickinson as the new lead singer in Bologna, Italy.
October 28 – British Phonographic Industry chairman Chris Wright unveils the UK music industry’s new slogan: “Home Taping Is Killing Music“.
October 31 – Punk band Fear makes a memorable appearance on Saturday Night Live. A group of fans storm the stage and damage TV equipment while moshing, resulting in the show cutting to commercial.
November 18 – While sitting in Tom’s Restaurant in New York City, Suzanne Vega composes the song “Tom’s Diner”.
December 18 – An estimated 35 million people around the world watch a live satellite transmission of a Rod Stewart concert at the Los Angeles Forum. It is the first broadcast of its kind since Elvis Presley’s “Aloha from Hawaii” special in 1973.
December 31 – The tenth annual New Year’s Rockin’ Eve special airs on ABC, with appearances by Four Tops, Rick Springfield, Barry Manilow, Alabama and Rick James.

Also in 1981
The organ at the famous Heinävesi Church in Finland is renewed, using locks from the original organ.
Ozzy Osbourne bites the head off a dove at a record label gathering.
Alice Cooper drastically changes his appearance, leaving behind his trademark make-up and donning a military uniform.
Synth pop enjoys mainstream popularity in the UK, with groups such as Ultravox, Depeche Mode, Orchestral Manoeuvres in the Dark and The Human League releasing hit singles and albums.
Menudo’s golden era (1981–1985) begins in Latin America, parts of Europe and Asia.
Brad Whitford leaves Aerosmith and is replaced by Rick Dufay.
Phil Collins releases his first solo album (but will not leave the band Genesis until 1995).
Hal Willner “invents” the modern tribute album with Amacord Nino Rota.
AC/DC’s album “Dirty Deeds Done Dirt Cheap” is finally released in the United States.
Iron Maiden’s lead singer Paul Di’Anno leaves band due to heavy drinking, and is replaced by Bruce Dickinson.
Eric Carr joins Kiss on drums and makes his songwriting debut with “Under the Rose”.