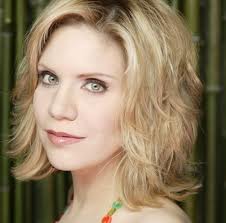 Alison Maria Krauss (born July 23, 1971) is an American bluegrass-country singer-songwriter and musician. She entered the music industry at an early age, winning local contests by the age of ten and recording for the first time at fourteen. She signed with Rounder Records in 1985 and released her first solo album in 1987. She was invited to join the band with which she still performs, Alison Krauss and Union Station (AKUS), and later released her first album with them as a group in 1989.

She has released fourteen albums, appeared on numerous soundtracks, and helped renew interest in bluegrass music in the United States. Her soundtrack performances have led to further popularity, including the O Brother, Where Art Thou? soundtrack, an album also credited with raising American interest in bluegrass, and the Cold Mountain soundtrack, which led to her performance at the 2004 Academy Awards. As of 2012, she has won 27 Grammy Awards from 41 nominations, making her tied as the most awarded living recipient, three behind the most honored artist, classical conductor Sir Georg Solti. She is also the most awarded singer and the most awarded female artist in Grammy history. At the time of her first award, at the 1991 Grammy Awards, she was the second youngest winner ever (currently tied as third youngest). (Source: Wikipedia)

On “Great Soul Performances” this evening, we’re going to look back on the year 1970. Lots of hits and fantastic music from that year, plus news stories, new innovations that made their debut in 1970, sports, Grammy Awards, Academy Awards, Emmy Awards and in general, a great time looking back to 1970. We kick it off at 7PM ET, 6PM CT, 5PM MT & 4PM PT. It’s 1970 this evening on RadioMaxMusic.com.

She is one of the most commercially and critically successful entertainers in modern entertainment history, with more than 71.5 million albums shipped in the United States and 140 million records sold worldwide. She is the best-selling female artist on the Recording Industry Association of America‘s (RIAA) Top Selling Album Artists list, the only female recording artist in the top ten, and the only artist outside of the rock and roll genre.

After beginning a successful recording career in the 1960s, by the end of the decade, Streisand ventured into film starring in the critically acclaimed Funny Girl (1968) and Hello, Dolly! (1969), the former for which she won the Academy Award and Golden Globe Award for Best Actress. Other notable films include The Owl and the Pussycat, The Way We Were and A Star Is Born for which she received her second Academy Award for composing the lyrics to the picture’s main song, Evergreen. By the 1980s, Streisand established herself as one of the film industry’s most notable figures by becoming the first woman to direct, produce, script and star in her own picture.

According to the RIAA, Streisand holds the record for the most top-ten albums of any female recording artist – a total of 32 since 1963. Streisand has the widest span (48 years) between first and latest top-ten albums of any female recording artist. With her 2009 album, Love Is the Answer, she became one of the rare artists to achieve number-one albums in five consecutive decades. According to the RIAA, she has released 51 Gold albums, 30 Platinum albums, and 13 Multi-Platinum albums in the United States. – Wikipedia