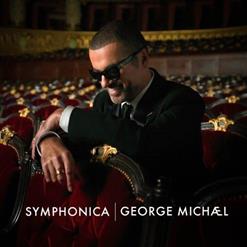 Symphonica is a live album by the English singer-songwriter George Michael and the only live album released during his lifetime. Released on March 14, 2014 through Aegean and Virgin EMI Records, Symphonica was Michael’s first album of new recordings since Patience (2004). Michael’s vocals were recorded at the Royal Albert Hall during his Symphonica Tour (2011–12), while the string arrangements were recorded in a studio.

The album contains mostly live versions of songs from his 2011–12 Symphonica Tour, including six of his own compositions (the rest being covers). The album was the final work by both American producer Phil Ramone, who died in March 2013, and by Michael himself, who died on Christmas Day 2016. The lead single, a cover of the Terence Trent D’Arby song “Let Her Down Easy”, debuted at number 53 on the UK Singles Chart in spite of little promotion. The album debuted at number one on the UK Albums Chart and sold 49,989 in its first week. “Patience”, a further song from the tour which does not appear on the final album track listing, was available as a free download for one week only from Amazon.com in the UK to coincide with the album release.

Wham! were an English pop duo consisting of George Michael and Andrew Ridgeley, formed in London in 1981. They became one of the most commercially successful pop acts of the 1980s, selling more than 30 million certified records worldwide from 1982 to 1986. Influenced by funk and soul music and presenting themselves as disaffected youth, Wham!’s 1983 debut album Fantastic addressed the United Kingdom’s unemployment problem and teen angst over adulthood.

Their second studio album Make It Big in 1984 was a worldwide pop smash hit, charting number one in both the UK and the United States. Associated with the MTV-driven Second British Invasion of the US, the singles from the album—”Wake Me Up Before You Go-Go”, “Everything She Wants” and “Careless Whisper”—all topped the US Billboard Hot 100. In 1985, Wham! made a highly publicised 10-day visit to China, the first by a Western pop group. The event was seen as a major watershed moment in increasing friendly bilateral relations between China and the West.

Michael was keen to create music targeted at a more sophisticated adult market rather than the duo’s primarily teenage audience, and therefore, Michael and Ridgeley officially announced the breakup of Wham! in the spring of 1986. Before going their separate ways, a farewell single “The Edge of Heaven”, and a greatest hits album titled The Final would be forthcoming, along with a farewell concert entitled The Final. Announcing the breakup, Michael said: “I think it should be the most amicable split in pop history.”

In January 1991, Ridgeley joined Michael on stage for a few songs at the encore of his performance at the Rock in Rio event at the Maracanã Stadium in Rio de Janeiro, Brazil. On November 21, 2009, there was a Wham!-themed night on television’s The X Factor in the UK. Michael later appeared on the show’s final episode, performing a duet of “Don’t Let the Sun Go Down on Me” with finalist and eventual winner Joe McElderry. In 2012, Michael said that there was no truth in speculation that he and Ridgeley were set for a Wham! reunion to mark the 30th anniversary of the group’s first album.

Michael died from heart and liver disease at his home in Goring-on-Thames, Oxfordshire on Christmas Day 2016. He was 53. 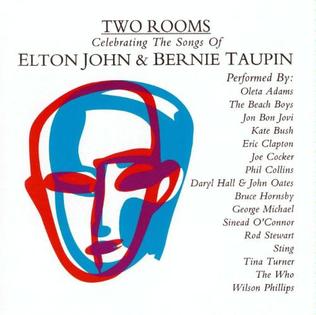 Two Rooms: Celebrating the Songs of Elton John & Bernie Taupin is a 1991 tribute album consisting of interpretations of sixteen songs written by Elton John and Bernie Taupin. The title refers to a song on John’s album 21 at 33, “Two Rooms at the End of the World”, and to the duo’s unusual collaborative style; it is also the title of a 1991 film documenting their collaboration.

George Michael (born Georgios Kyriacos Panagiòtou; (25 June 1963) is an English musician, singer, songwriter, multi-instrumentalist and record producer. Michael rose to fame in the 1980s when he formed the pop duo Wham! with his school friend, Andrew Ridgeley. His first solo single, “Careless Whisper”, was released when he was still in the duo and sold about six million copies worldwide.

As one of the world’s best-selling music artists, Michael has sold more than 100 million records worldwide as of 2010. His 1987 debut solo album, Faith, has sold more than 20 million copies worldwide and made several records and achievements in the United States. Michael has garnered seven number one singles in the UK and eight number one hits on the Billboard Hot 100 in the US. In 2008, Billboard magazine ranked Michael the 40th most successful artist on the Billboard Hot 100 Top All-Time Artists list.

In 2004, the Radio Academy named Michael as the most played artist on British radio between the period of 1984–2004. The documentary A Different Story was released in 2005; it covered his personal life and professional career. In 2006, George Michael announced his first tour in 15 years, the worldwide 25 Live tour, spanning three individual tours over the course of three years. (Source: Wikipedia)