Franklin Joseph “Frankie” Lymon (September 30, 1942 – February 27, 1968) was an American rock and roll/rhythm and blues singer and songwriter, best known as the boy soprano lead singer of the New York City-based early rock and roll group The Teenagers. The group was composed of five boys, all in their early to mid-teens. The original lineup of the Teenagers, an integrated group, included three African-American members, Frankie Lymon, Jimmy Merchant, and Sherman Garnes; and two Puerto Rican members, Joe Negroni and Herman Santiago. The Teenagers’ first single, 1956’s “Why Do Fools Fall in Love,” was also its biggest hit. After Lymon went solo in mid-1957, both his career and that of the Teenagers fell into decline. His life was dramatized in the 1998 film Why Do Fools Fall In Love.

By 1957, the group was being billed as “Frankie Lymon and the Teenagers”. This caused in-fighting, and by September, Goldner had pulled Lymon out of the group to record solo. The Teenagers continued recording, bringing in a new lead. Billy Lobrano, as the group’s first white member, made them more racially mixed, now with two black, two Hispanic, and one white member. The group had little success with Lobrano, and he left in mid-1958.

Sherman Garnes died of a heart attack in 1977, while Joe Negroni died a year later due to a cerebral hemorrhage. Their replacements were Bobby Jay and Frankie’s brother Lewis Lymon, respectively. In the 1980s, the Teenagers had resorted to using a female singer to imitate Lymon’s prepubescent voice, and Pearl McKinnon joined the band. The members at that time were Jimmy Merchant, Herman Santiago, Eric Ward, and Pearl McKinnon. By 1983, Ward had been replaced by Derek Ventura, and in 1984 Phil Garrito took over for Ventura. Roz Morehead replaced McKinnon, and Marilyn Byers moved into Morehead’s lead spot. Later in the 1980s the group had settled on a new lead, Jimmy Castor. Castor remained lead until the 1990s, when he was replaced by Timothy Wilson, former lead of Tiny Tim and the Hits. This line-up appeared on the PBS special Doo Wop 51 in 2000.

On February 27, 1968, Lymon was found dead of a heroin overdose at the age of 25 on the floor of his grandmother’s bathroom with a syringe by his side. Lymon, a Baptist, was buried at Catholic Saint Raymond’s Cemetery in the Throggs Neck section of The Bronx, New York City, New York. “I’m Sorry” and “Seabreeze”, the two songs Lymon had recorded for Big Apple before his death, were released later in 1968.

I hope all of our Mothers had a wonderful day yesterday and in keeping with that spirit and sentiment, this evening on “Great Soul Performances” all of the music will be about Mothers, Mamas, Mothers-In-Law, and even “Baby Mamas” provided by: The Supremes, Lyn Collins, Brook Benton, the Teenagers, Ruth Brown, the Temptations, James Brown, Three Dog Night, Frankie Lymon, Tom Jones, the Shirelles, Lou Rawls, Sharon Redd-Ula Hedwig-Charlotte Crossley (formerly of the Harlettes), Ernie K-Doe, yours truly & the Laddins and so many more. Be here for the fun at 6PM ET, 5PM CT, 4PM MT and 3PM PT as we salute our moms on “Great Soul Performances” on the best station on the internet, RadioMaxMusic.Com.

It’s going to be a very busy evening on “Great Soul Performances” with music from: A Taste of Honey, Frankie Lymon, the Dynamic Superiors, Tower of Power, the Blues Image, Carl Feaster & the Chords, the Spinners, the Chantels, the Temptations, Pookie Hudson & the Spaniels; two concert tracks from the Commodores & Betty Wright and a tribute to the late Bobby Freeman who passed away on Saturday January 28th. I think you’re going to love this show. It kicks off at 7PM ET, 6PM CT, 5PM MT and 4PM PT. I’m looking to see you later for “Great Soul Performances” at the home of the hits, RadioMaxMusic.Com.

The celebration begins at 7PM ET, 6PM CT, 5PM MT & 4PM PT with the encore performances on Monday at 10PM and on Wednesday, Christmas Day at 12 Noon, both times are eastern time. So join me as we “Deck The Halls” and bring along some egg nog to drink this evening on RadioMaxMusic.com. Ho! Ho! Ho!

On “Great Soul Performances” this evening, Live from the fairground of the “Big E” you’ll hear Darlene Love, Larry Chance, the O’Jays, the Dells, Natalie Cole, the Dramatics, the Stylistics, Frankie Lymon, Eugene Pitt, segment 6 of “The Motown Story,” and Main Ingredient “in concert.” We start at 7PM ET, 6PM CT, 5PM MT & 4PM PT. Don’t forget if you miss the show, we schedule an encore performance on Monday night on RadioMaxMusic.com. 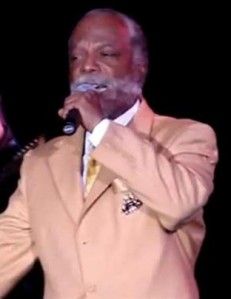 I hope everyone will tune in this evening to “Great Soul Performances” on RadioMaxMusic.com. This week’s show was pre-recorded because I’m in Lyndhurst, New Jersey hosting the outdoor Summer Concert Series there, so I can’t give you many details, other than it will be another great show with all the things you expect to hear. It starts at 7PM ET, 6PM CT, 5PM MT & 4PM PT. It’s been a tough week for me trying to cope with the passing of another of my brothers, Lewis Lymon on Tuesday.  Next week I’ll do a small segment saluting the career of the last Lymon brother, Lewis.