David Van Cortlandt Crosby (born August 14, 1941) is an American singer-songwriter and musician. In addition to his solo career, he was a founding member of both the Byrds and Crosby, Stills & Nash.

Crosby joined the Byrds in 1964. Bob Dylan gave the band their first number one hit in April 1965 with “Mr. Tambourine Man”. Crosby appeared on the Byrds’ first five albums and produced the original lineup’s 1973 reunion album. In 1967 he joined Buffalo Springfield on stage at the Monterey Pop Festival, which contributed to his dismissal from the Byrds. He subsequently formed Crosby, Stills & Nash in 1968 with Stephen Stills (of Buffalo Springfield) and Graham Nash of the Hollies. After the release of their debut album CSN won the Grammy Award for Best New Artist of 1969. Neil Young joined the group for live appearances, their second concert being Woodstock, before recording their second album Déjà Vu. Meant to be a group that could collaborate freely, Crosby and Nash recorded three gold albums in the 1970s, while the core trio of CSN remained active from 1976 until 2016. CSNY reunions took place in each decade from the 1970s through the 2000s.

The Byrds were an American rock band that were formed in Los Angeles, California in 1964.

The bulk of the band’s releases were issued on Columbia Records or its subsidiaries, with a notable exception being their final studio album from 1973. This final album, titled Byrds, and its accompanying singles (“Full Circle”, “Things Will Be Better”, and “Cowgirl in the Sand”) were all released on Asylum Records. In addition, the band released a single under the pseudonym of the Beefeaters in October 1964 on Elektra Records (Pye Records in the UK), before they had signed a recording contract with Columbia.

The Byrds’ discography was originally released on the vinyl format, as full-length LPs, shorter EPs, and singles. Since the 1960s, the band’s back catalogue has also been released on reel-to-reel tape, audio cassette, 8-track tape, CD, MiniDisc, digital downloads, and, most recently, as streaming media. Between 1965 and 1968, the Byrds’ albums were released in both mono and stereo variations, with Sweetheart of the Rodeo being the first album to be released exclusively in stereo in the US (Sweetheart of the Rodeo and its follow-up Dr. Byrds & Mr. Hyde were both issued in mono and stereo configurations in the UK). 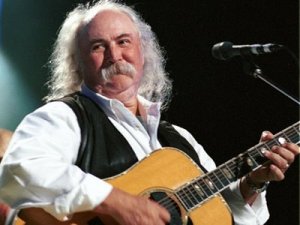 David Van Cortlandt Crosby (born August 14, 1941) is an American guitarist, singer, and songwriter. In addition to his solo career, he was a founding member of three bands: The Byrds; Crosby, Stills & Nash (who are sometimes joined by Neil Young); and CPR. Crosby has been inducted into the Rock and Roll Hall of Fame twice: once for his work in The Byrds and once for his work with CSN.

This countdown is a compilation of David Crosby music with The Byrds, Crosby, Still, Nash & Young, Solo work and Crosby Stills & Nash.