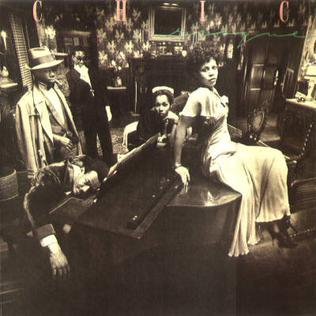 Risqué is the third studio album by American disco band Chic, released on Atlantic Records on July 30, 1979. One of the records that defined the disco era, the album became highly influential not only within the movement, but also in other styles such as hip hop, art rock and new wave. In 2020, Rolling Stone ranked the album at number 414 on their list of the 500 Greatest Albums of All Time. 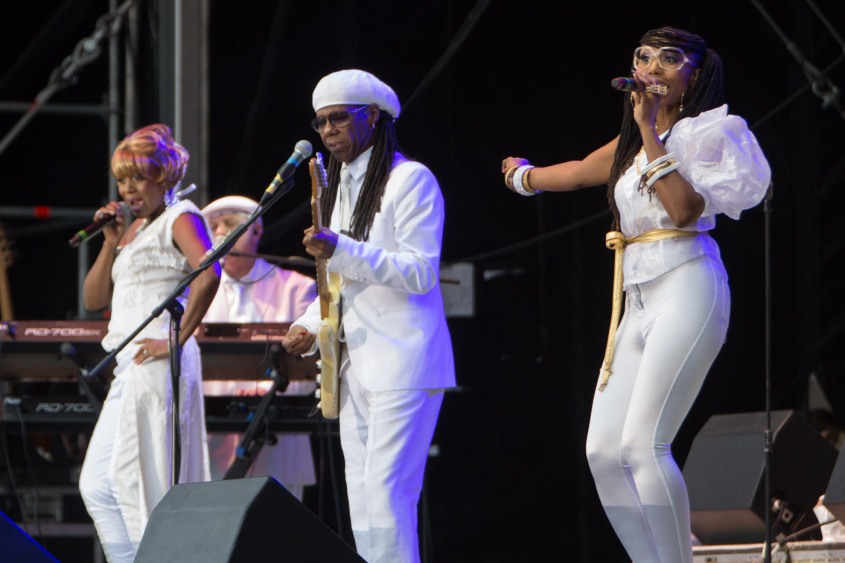 Chic, currently called Nile Rodgers & Chic, is an American band that was organized during 1976 by guitarist Nile Rodgers and bassist Bernard Edwards. It recorded many commercially successful disco songs, including “Dance, Dance, Dance (Yowsah, Yowsah, Yowsah)” (1977), “Everybody Dance” (1977), “Le Freak” (1978), “I Want Your Love” (1978), “Good Times” (1979), and “My Forbidden Lover” (1979). The group regarded themselves as a rock band for the disco movement “that made good on hippie peace, love and freedom”. In 2017, Chic was nominated for induction into the Rock and Roll Hall of Fame for the eleventh time.

At the same time, Edwards and Rodgers composed, arranged, performed, and produced many influential disco and R&B records for various artists, including Sister Sledge’s albums We Are Family (1979) and Love Somebody Today (1980); Sheila and B. Devotion’s “Spacer”; Diana Ross’s 1980 album Diana, which included the successful singles “Upside Down”, “I’m Coming Out” and “My Old Piano”; Carly Simon’s “Why” (from 1982 soundtrack Soup for One); and Debbie Harry’s debut solo album KooKoo (1981). An album recorded with Johnny Mathis was rejected by his label and remains unreleased.

Nile Gregory Rodgers Jr. (born September 19, 1952) is an American record producer, songwriter, musician, composer, arranger and guitarist. The co-founder of Chic, he has written, produced, and performed on records that have cumulatively sold more than 500 million albums and 75 million singles worldwide. He is a Rock and Roll Hall of Fame inductee, a three-time Grammy Award-winner, and the chairman of the Songwriters Hall of Fame. Known for his “chucking” guitar style, Rolling Stone wrote in 2014 that “the full scope of Nile Rodgers’ career is still hard to fathom.”

Formed as the Big Apple Band in 1970 with bassist Bernard Edwards, Chic released their self-titled debut album in 1977. It included the hit singles “Dance, Dance, Dance (Yowsah, Yowsah, Yowsah)” and “Everybody Dance”. The 1978 album C’est Chic produced the hits “I Want Your Love” and “Le Freak”, with the latter selling more than 7 million singles worldwide. The song “Good Times” from the 1979 album Risqué was a number one single on the pop and soul charts, and became one of the most-sampled songs of all time, “ushering in” hip-hop via The Sugarhill Gang’s “Rapper’s Delight”, inspiring Queen’s “Another One Bites the Dust”, and anchoring the Daft Punk hit “Around the World”.

Bernard Edwards (October 31, 1952 – April 18, 1996) was an American bass player, singer, songwriter and record producer, known primarily for his work in disco music with guitarist Nile Rodgers, with whom he co-founded Chic. In 2017, Edwards was selected as the 53rd greatest bassist of all time by Bass Player magazine.

In 1996 Nile Rodgers was named Japan Tobacco Super Producer of the Year in Japan, and was invited to perform there with Chic in April of that year. Just before the concert at the Budokan Arena in Tokyo, Edwards fell ill, but despite Rodgers’ insistence, refused to cancel the gig. He managed to perform but had to be helped at times. At one point, Edwards blacked out for a few seconds before resuming his playing. Rodgers assumed the absence of bass was a deliberate improvisation and did not learn the truth until after the show. After the concert, Nile went to check on Bernard and asked how he was doing, to which he replied “I’m fine, I just need to rest.” This was the last time Nile spoke to Bernard. Edwards retired to his hotel room where he was later found dead by Rodgers. The medical examiner determined the cause of death was pneumonia. Edwards’ final performance was issued in 1996 as the album Live at the Budokan. 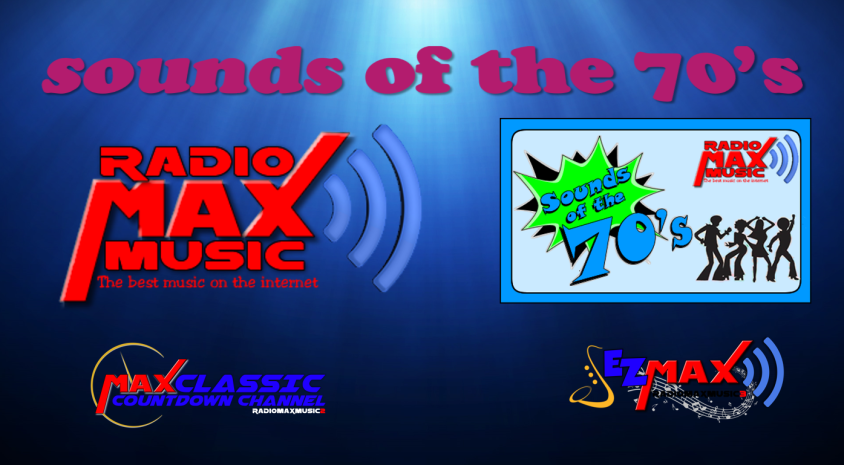 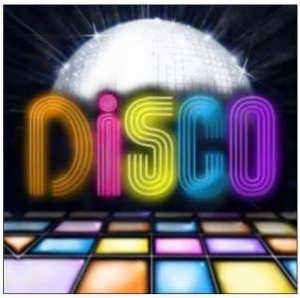 Hopefully the bitter winter season is finally going to be behind us, and that makes me wanna dance. I was a fan of “Disco.” So, starting today, and going forward throughout the rest of the year on “Great Soul Performances,” we’ll take some time out to salute that era that people either loved or hated.

I’m sure that all over the country many cities had their favorite discos, but for me, being a Native New Yorker, I’ll never forget hanging out and dancing in places like “Xenon” on West 43rd Street, the “Cheetah” on 52nd Street, the “Electric Circus” on St. Mark’s Place in the East Village, “Trude Heller’s” aka “Trude Heller’s Trick” at 418 6th Avenue at 9th Street, “Fantasy East” in the Wakefield section of the Bronx, “Two Different Worlds” in Woodside Queens and of course the “disco of discos,” “Studio 54” on 54th Street between Broadway and 8th Avenue.

Cynthia and I went there often and we were there the night Frankie Crocker rode in on a white stallion. Memories none of us will ever forget. So you see where I’m going here. I’ve polished up the old Disco Ball, put on my platform shoes and my bell bottom pants and we are going to get down. All your favorite disco artists will be on board like: Donna Summer, the Village People, Chic, Amii Stewart, the Bee Gees, Thelma Houston, the Trammps, Harold Melvin & the Blue Notes, Rick James and all the rest.

Our disco opens at 7PM ET, 6PM CT, 5PM MT and 4PM PT. Naturally, we kick it off after the encore of this past Sunday’s “Great Soul Performances 2: The 80’s” at 5PM eastern time. It’s gonna be a “Disco Inferno” this evening on “Great Soul Performances” on RadioMaxMusic.com. BTW, don’t forget to move your clocks ahead one hour at 2AM eastern as we usher in what we used to call “Daylight Savings Time” as hope springs eternal. Pun intended. See Ya Later ‘Gator! 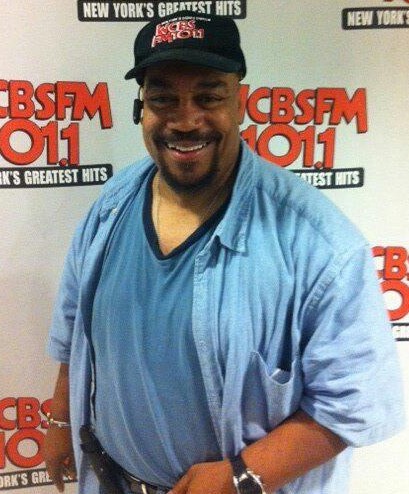 Good Saturday to all my friends. On the show this evening will be: Charles Wright & the Watts 103rd St. Rhythm Band, M.C. Hammer, Rick James, the Delfonics, David Ruffin & Eddie Kendricks, the Dells, Black Ivory, and James Brown “live.” “Great Soul Performances” begins at  10pm ET on RadioMaxMusic.Com. I hope you can join me.