21 is the second studio album by English recording artist Adele. Released on 24 January 2011 in most of Europe, and on 22 February 2011 in North America, it was named after the age of the singer during its production. The album shares the folk and Motown soul influences of her 2008 debut album 19, but was further inspired by the American country and Southern blues music to which she had been exposed during her 2008–2009 North American tour An Evening with Adele. Composed in the aftermath of the singer’s separation from her partner, the album explores themes of anger, revenge, heartbreak, self-examination, and forgiveness.

Adele began writing 21 in April 2009, while still involved in the relationship that subsequently inspired the record. Dissatisfied with once again portraying herself as the musical tragedian of her debut, she had intended to compose a more upbeat and contemporary follow-up. However, studio sessions ended prematurely due to a lack of inspiration. She resumed production immediately after the breakdown of her relationship, channeling her heartbreak and depression into her songs. Adele collaborated with various songwriters and producers, including Columbia Records co-president Rick Rubin, Paul Epworth, Ryan Tedder, Jim Abbiss, and Dan Wilson.

Praised by critics for its understated production, vintage authenticity, and Adele’s vocal performance, 21 defied the modest commercial expectations of her indie record label XL Recordings and became a sleeper hit in 2011. The album topped the charts in more than 30 countries and appeared in the 2012 edition of the Guinness World Records. The United Kingdom’s best-selling album of the 21st century, its 23-week tenure atop the UK Albums Chart is the longest by a female solo artist. In the United States the album held the top position for 24 weeks, longer than any other album since 1985, and was certified Diamond. Singles “Rolling in the Deep”, “Someone like You” and “Set Fire to the Rain” became worldwide number-one hits, while “Rumour Has It” and “Turning Tables” charted in the top 20 across Europe and North America.

Globally, 21 was the biggest selling musical release for both 2011 and 2012, and helped revitalise lagging sales of the United States and UK music industry. Critics hailed the album as a shift from the overtly sexual and sonically bombastic status quo, and attributed its success to its deeply autobiographical yet universal songs. As of December 2012, the album has sold over 26.5 million copies worldwide according to the International Federation of the Phonographic Industry. 21 was nominated for the 2011 Mercury Prize and the following year won the Grammy Award for Album of the Year and the BRIT Award for British Album of the Year. – Wikipedia

The Police were an English rock band formed in London in 1977. For the vast majority of their history, the band consisted of Sting (lead vocals, bass), Andy Summers (guitar) and Stewart Copeland (drums). The Police became globally popular in the late 1970s and are generally regarded as one of the first new wave groups to achieve mainstream success, playing a style of rock that was influenced by punk, reggae, and jazz.

Their 1983 album, Synchronicity, was number one on both the UK Albums Chart and the US Billboard 200, and sold over 8 million copies in the US. The group disbanded in 1986, but reunited in early 2007 for a one-off world tour lasting until August 2008. The band has won a number of music awards throughout their career, including six Grammy Awards, two Brit Awards—winning Best British Group once, an MTV Video Music Award, and in 2003 were inducted into the Rock and Roll Hall of Fame. The Police have sold more than 50 million albums worldwide, and were the world’s highest-earning musicians in 2008, thanks to their reunion tour.  (Source: Wikipedia) 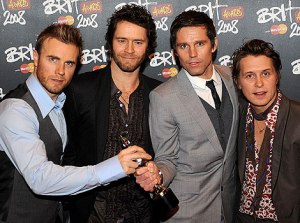 Take That are an English five-piece vocal pop group comprising Gary Barlow, Howard Donald, Jason Orange, Mark Owen and Robbie Williams. Barlow acts as the lead singer and primary songwriter. In total, the group have had 27 top 40 singles and 16 top 5 singles in the United Kingdom alone, 11 of which have reached number 1, as well as having seven number 1 albums. Internationally the band have had 54 number one hits and 35 number 1 albums.

Take That’s tunes and soulful ballads dominated the UK charts in the first half of the 1990s, winning multiple BRIT Awards while also spawning two of the best selling albums of the decade with Everything Changes (which was nominated for the 1994 Mercury Prize) and their Greatest Hits album. Robbie Williams left the band in 1995 while the four remaining members completed their world tour and released a final single before splitting up in 1996.

After filming a 2005 documentary about the group and releasing a new greatest hits album, a four-piece Take That without Williams officially announced a 2006 reunion tour around the UK, entitled The Ultimate Tour. On 9 May 2006, it was announced that the group were set to record new material together once again; their fourth studio album, Beautiful World, was released in 2006 and was followed up with The Circus, in 2008. The group achieved new success as a four-piece, scoring a string of chart hits across the UK and Europe while taking the number of records sold to 45 million worldwide.

Williams rejoined Take That in 2010 for the band’s sixth studio album, Progress. It was released on 15 November of that year and became the fastest selling album of the 21st century, the second fastest selling album in British history, whilst also making it the first album of new material to feature Take That’s original line-up since their 1995 album, Nobody Else. Since 2011, Take That have set the new record for the fastest selling tour of all time in the UK with Progress Live, beating the previous record set by their Circus Live Tour in 2009, won the BRIT award for Best British group, and were named as Amazon’s top-selling music artist of all time. In 2012 the band were announced by Forbes as the 5th highest-earning music stars in the world. In the same year, the Official Charts Company revealed the biggest selling singles artists in British music chart history with Take That currently placed at 15th overall, making them the most successful boyband in UK chart history. (Source: Wikipedia)

Pet Shop Boys have sold 50 million records worldwide, and are listed as the most successful duo in UK music history by The Guinness Book of Records. Three-time Brit Award winners and six-time Grammy nominees, since 1985 they have achieved 42 Top 30 singles and 22 Top 10 hits in the UK Singles Chart, including four number ones: “West End Girls“, “It’s a Sin”, “Always on My Mind” and “Heart”.

At the 2009 BRIT Awards, Pet Shop Boys received an award for Outstanding Contribution to Music. The band’s eleventh studio album, titled Elysium (continuing their tradition of single word titles), was released in September 2012, the first single of which, titled “Winner”, was released on 2 July 2012. Their twelfth studio album Electric is due for release in July 2013. (Source: Wikipedia)

UB40 are a British reggae/pop band formed in 1978 in Birmingham, England. The band has placed more than 50 singles in the UK Singles Chart, and has also achieved considerable international success. The band has been nominated for the Grammy Award for Best Reggae Album four times, and in 1984, were nominated for the Brit Award for Best British Group.

One of the world’s best-selling music artists, UB40 have sold over 70 million records.

Their hit singles include their debut “Food for Thought” and two U.S. Billboard Hot 100 number ones with “Red Red Wine” and “Can’t Help Falling in Love“. Both of these also topped the UK Singles Chart, as did the band’s version of “I Got You Babe“. (Source: Wikipedia)

Paul Antony Young (born 17 January 1956) is an English rock and pop musician. Formerly the frontman of the short-lived bands ‘Kat Kool & The Kool Cats’, Streetband and Q-Tips, his following solo success turned him into a 1980s teen idol. He is famous for such hit singles as “Love of the Common People“, “Wherever I Lay My Hat (That’s My Home)”, “Come Back and Stay“, “Everytime You Go Away” and “Oh Girl“. His debut album No Parlez turned him into a household name.

Since the mid-1980s, he has had international success, along with his backing band Los Pacaminos.

In 1985, he appeared at Geldof and Ure’s charity convention Live Aid, where he appeared at the London Wembley Stadium performing the Band Aid hit “Do They Know It’s Christmas” (having sung the opening lines on the original single release), and his own hits “Come Back and Stay” and “Everytime You Go Away”, with Alison Moyet joining him on-stage to perform “That’s The Way Love Is”. At the 1985 Brit Awards, Young received the award for Best British Male.

In the past decade, Young has released very little new material, but has continued to tour in different parts of the world.  (Source: Wikipedia) 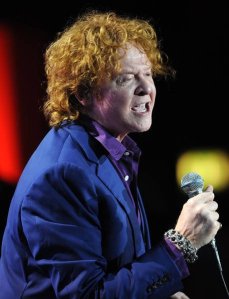 Simply Red were an English soul band that sold more than 50 million albums over a 25-year career. Their style drew upon influences ranging from blue-eyed soul, New Romantic, and rock to reggae and jazz. From their early days, the main driving force behind the band was singer Mick Hucknall, who, by the time the band was disbanded in 2010, was the only original member left. At the 1992 and 1993 Brit Awards they received the award for Best British Group. (Source: Wikipedia)