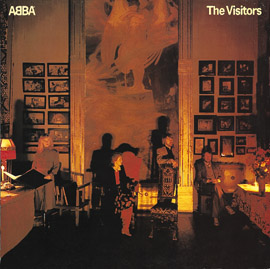 The Visitors is the eighth and final studio album by Swedish pop group ABBA, released on 30 November 1981.

With The Visitors, ABBA took several steps away from the “lighter” pop music they had recorded previously and the album is often regarded as a more complex and mature effort. The opening track, “The Visitors”, with its ominous synthesizer sounds and the distinctive lead vocal by Frida, announced a change in musical style. With Benny and Frida going their separate ways, the pain of splitting up was explored yet again in “When All is Said and Done“. The major hit single on the album, “One of Us” also depicted the end of a love story. Elsewhere there were current Cold War themes—highly topical at the time—and further songs of isolation and regret.

The Visitors album was one of the first records to be recorded and mixed digitally, and was the first in history to be manufactured on the new CD format in 1982 on Atlantic. The Visitors has been reissued in digitally remastered form three times—first in 1997, then in 2001 and again in 2005 as part of The Complete Studio Recordings box set.

The Visitors Deluxe Edition was released on 23 April 2012. As with previous releases in the Deluxe Edition series, this version of ABBA’s final album offers a DVD of archive material along with CD bonus tracks – including the demo medley “From a Twinkling Star to a Passing Angel”, the first previously-unreleased ABBA recordings since 1994.  (Source: Wikipedia)