One Night Only is a live album and DVD/Blu-ray by the Bee Gees. It features the group’s concert at the MGM Grand in Las Vegas November 14, 1997 and includes many of their greatest hits. Released September 7, 1998.

The CD is edited, with some songs omitted, though the DVD version of the concert is complete. The album was reissued in 1999, and included a bonus CD with the missing songs. The CD and DVD cover features the band replicating their iconic Saturday Night Fever pose. The concert was re-released on SD Blu-ray by Eagle Rock Entertainment in 2013. The re-release provides superior audio quality than what is possible on DVD, but video is only marginally improved (the standard-definition video is now up-scaled to 1080i).

The Bee Gees performed songs from every decade from the 1960s to the ’90s. They also sang a tribute song to their late brother Andy Gibb, “(Our Love) Don’t Throw It All Away”. During this song old footage of Andy is shown, including him singing the second verse of the song. The vocals from the original recording also play during that section. Céline Dion guest-starred on the Bee Gees-penned “Immortality”. Recorded vocals by Frankie Valli are featured during “Grease”, and are also taken from the original song.

The album’s title was originally meant to reflect the band’s plan that the Las Vegas concert would be their final live performance ever. Barry Gibb’s arthritis in his back had worsened to the point where it seemed it would be impossible for him to continue playing. He nonetheless wanted to expand the tour, so they played several more shows, holding one every two weeks so that Barry would be able to recover from his injury.

Children of the World, released September 13, 1976, album by the Bee Gees. The first single, “You Should Be Dancing”, went to No. 1 in the US and Canada, and was a top ten hit in numerous other territories. It was the group’s fourteenth album (twelfth internationally). The album was re-issued on CD by Reprise Records and Rhino Records in 2006. This was the first record featuring the Gibb-Galuten-Richardson production team which would have many successful collaborations in the following years.

Still Waters is the twenty-first and penultimate studio album by the pop group the Bee Gees, released on March 10, 1997 in the UK by Polydor Records, and on May 6 the same year in the US by A&M Records.

Spirits Having Flown is the fifteenth album released by the Bee Gees on February 5, 1979. It was the group’s first album after their collaboration on the Saturday Night Fever soundtrack. The album’s first three tracks were released as singles and all reached No. 1 in the US, giving the Bee Gees an unbroken run of six US chart-toppers in a one-year period and equaling a feat shared by Bing Crosby, Elvis Presley, and the Beatles. It was the first Bee Gees album to make the UK top 40 in ten years (not counting the soundtrack for Saturday Night Fever), as well as being their first and only UK No. 1 album. Spirits Having Flown also topped the charts in Australia, Canada, Germany, New Zealand, Sweden, and the US. And went on to sell over 30 million copies worldwide.

Spirits Having Flown marked the tail end of the band’s most successful era, prior to a severe downturn in the early 1980s when they were subject to a near-total radio blackout (particularly in America) that Robin Gibb would refer to as “censorship” and “evil” in interviews.

The Very Best of the Bee Gees is a greatest hits album by British/Australian pop group the Bee Gees. It was originally released in November 1990 by Polydor Records, around the time as the Tales from the Brothers Gibb box set. The album was primarily aimed at the European market, as shown by the exclusion of the US hits “Holiday”, “I Started a Joke”, “Lonely Days”, “How Can You Mend a Broken Heart” and “Fanny (Be Tender with My Love)”.

One is the Bee Gees’ eighteenth studio album (sixteenth worldwide), released in April 1989 (August 1989 in the United States).

The Bee Gees were a pop music group formed in 1958 that consisted principally of brothers Barry, Robin, and Maurice Gibb. Born on the Isle of Man to English parents, the Gibb brothers lived in Chorlton, Manchester, England until the late 1950s. There, in 1955, they formed the skiffle/rock and roll group The Rattlesnakes. The family then moved to Redcliffe, in the Moreton Bay Region, Queensland, Australia, and then to Cribb Island. The trio were successful for most of their decades of recording music, but they had two distinct periods of exceptional success: as a rock act in the late 1960s and early 1970s, and as prominent performers of the disco-music era in the late 1970s.

In the United States, the album was certified 16× Platinum for shipments of at least 16 million units. The album stayed atop the charts for 24 straight weeks from January to July 1978 and stayed on Billboard’s album charts for 120 weeks until March 1980. In the UK, the album spent 18 consecutive weeks at No. 1. The album epitomized the disco phenomenon on both sides of the Atlantic and was an international sensation. The album has been added to the National Recording Registry in the Library of Congress for being culturally significant. 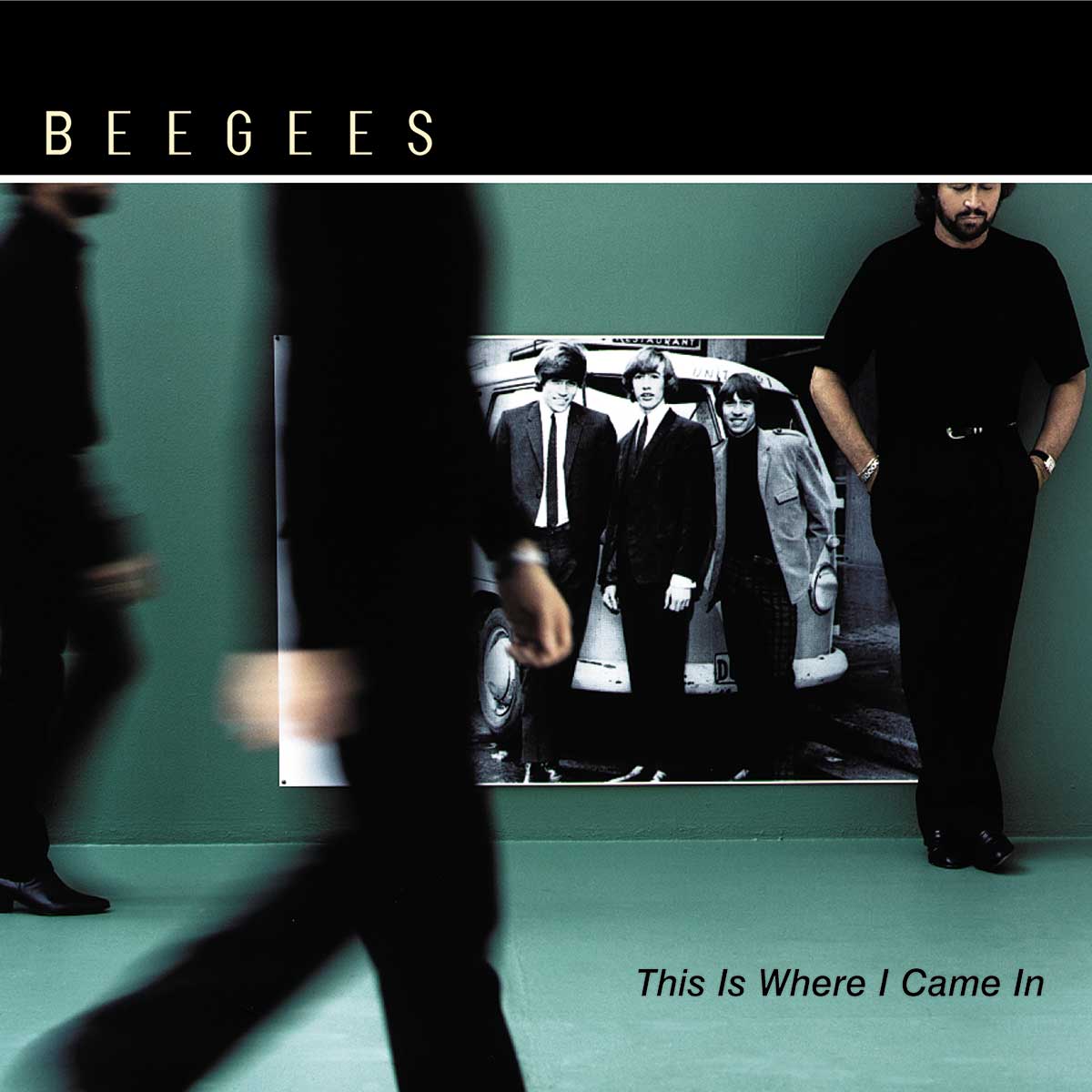 This Is Where I Came In is the twenty-second and final studio album by the English pop group the Bee Gees. It was released on April 24, 2001 by Polydor in the UK and Universal in the US, just less than two years before Maurice Gibb’s unexpected death from a cardiac arrest before surgery to repair a twisted intestine.

It is the only album of all-new material released by them on the Universal Music label (which had acquired the rights to the group’s releases on Polydor Records when they bought that label’s parent PolyGram). The album peaked at No. 6 in the UK, while the single, “This Is Where I Came In”, reached No. 18. In the US, the album peaked at No. 16. The group appeared on the A&E concert series Live by Request in April 2001 to promote the new album.

The brothers saw the album as a return to the original Bee Gees formula as well as a new beginning. The album marked the fifth decade of recording for the band. It was one of the first Bee Gees albums to be re-released on Reprise Records in 2006, when the brothers regained the rights to all of their recordings.

The Bee Gees were a music group formed in 1958. Their lineup consisted of brothers Barry, Robin, and Maurice Gibb. The trio were especially successful as a popular music act in the late 1960s and early 1970s, and later as prominent performers of the disco music era in the mid-to-late 1970s. The group sang recognizable three-part tight harmonies; Robin’s clear vibrato lead vocals were a hallmark of their earlier hits, while Barry’s R&B falsetto became their signature sound during the mid-to-late 1970s and 1980s. The Bee Gees wrote all of their own hits, as well as writing and producing several major hits for other artists. The Bee Gees are widely referred to by many critics, media outlets and fellow artists as the “Kings of Disco”.

Born on the Isle of Man to English parents, the Gibb brothers lived in Chorlton, Manchester, England until the late 1950s. There, in 1955, they formed the skiffle/rock and roll group the Rattlesnakes. The family then moved to Redcliffe, in the Moreton Bay Region, Queensland, Australia, and then to Cribb Island. After achieving their first chart success in Australia as the Bee Gees with “Spicks and Specks” (their 12th single), they returned to the UK in January 1967, when producer Robert Stigwood began promoting them to a worldwide audience. The Bee Gees’ Saturday Night Fever soundtrack (1977) was the turning point of their career, with both the film and soundtrack having a cultural impact throughout the world, enhancing the disco scene’s mainstream appeal. They won five Grammy Awards for Saturday Night Fever, including Album of the Year.

The Bee Gees have sold over 120 million records worldwide (with estimates as high as over 220 million), making them among the best-selling music artists of all time. They were inducted into the Rock and Roll Hall of Fame in 1997; the presenter of the award to “Britain’s first family of harmony” was Brian Wilson, historical frontman of the Beach Boys, another “family act” featuring three harmonizing brothers. The Bee Gees’ Hall of Fame citation says, “Only Elvis Presley, the Beatles, Michael Jackson, Garth Brooks and Paul McCartney have outsold the Bee Gees.” The Bee Gees are the third most successful band in Billboard charts history after the Beatles and the Supremes.

Following Maurice’s death in January 2003 at the age of 53, Barry and Robin retired the group’s name after 45 years of activity. In 2009, Robin announced that he and Barry had agreed that the Bee Gees would re-form and perform again.  Robin died in May 2012, aged 62, after a prolonged struggle with cancer and other health problems, leaving Barry as the only surviving member of the group.