Bananarama are an English female pop music vocal group formed in London in 1981 by friends Sara Dallin, Siobhan Fahey and Keren Woodward. Their success on both pop and dance charts has earned them a listing in the Guinness World Records as the all-female group with the most chart entries in the world. Between 1982 and 2009, they had 28 singles reach the Top 50 of the UK Singles Chart.

Fahey left the group in 1988 and formed Shakespears Sister, best known for the UK number one “Stay” (1992). She was replaced by Jacquie O’Sullivan. This line-up had UK top five hits with “I Want You Back” (1988) and The Beatles track “Help!” (1989), recorded with comedy duo French and Saunders for the charity Comic Relief. In 1989 they embarked on their first world tour. 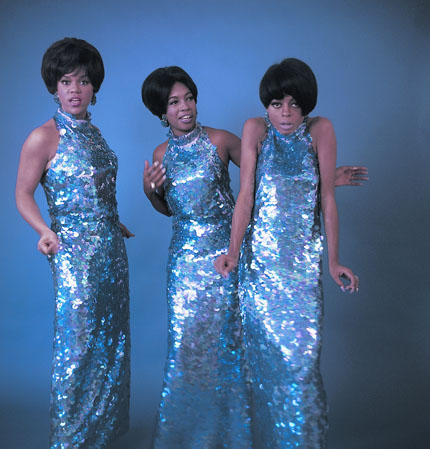 The Supremes were an American female singing group and the premier act of Motown Records during the 1960s. Founded as The Primettes in Detroit, Michigan, in 1959, the Supremes were the most commercially successful of Motown’s acts and are, to date, America’s most successful vocal group with 12 number one singles on the Billboard Hot 100] Most of these hits were written and produced by Motown’s main songwriting and production team, Holland–Dozier–Holland. At their peak in the mid-1960s, the Supremes rivaled the Beatles in worldwide popularity, and it is said that their success made it possible for future African American R&B and soul musicians to find mainstream success.

Florence Ballard, Mary Wilson, Diana Ross, and Betty McGlown, the original group, are all from the Brewster-Douglass public housing project in Detroit. They formed the Primettes as the sister act to the Primes (with Paul Williams and Eddie Kendricks, who went on to form the Temptations). Barbara Martin replaced McGlown in 1960, and the group signed with Motown the following year as the Supremes. Martin left the act in early 1962, and Ross, Ballard, and Wilson carried on as a trio.

During the mid-1960s, the Supremes achieved mainstream success with Ross as lead singer and Holland-Dozier-Holland as its songwriting and production team. In 1967, Motown president Berry Gordy renamed the group Diana Ross & the Supremes, and replaced Ballard with Cindy Birdsong. Ross left to pursue a solo career in 1970 and was replaced by Jean Terrell, so the group’s name reverted to The Supremes. During the mid-1970s, the lineup changed with Lynda Laurence, Scherrie Payne and Susaye Greene joining the group until, after 18 years, The Supremes disbanded in 1977. Wikipedia

Enrique “Ricky” Martín Morales (born December 24, 1971) is a Puerto Rican singer, actor and author. He is regarded as the King of Latin Pop. He holds dual American and Spanish citizenship. Martin began his career at age 12 with the all-boy pop group Menudo. After five years with the group, he released several Spanish-language solo albums throughout the 1990s. He also acted on stage and on TV in Mexico, where he achieved modest stardom. In 1994, he appeared on the US TV soap opera General Hospital, playing a Puerto Rican singer.

In early 1999, after releasing several albums in Spanish, Martin performed “The Cup of Life” at the 41st Annual Grammy Awards show, which became a catalyst in bringing Latin pop to the forefront of the U.S. music scene. Following its success, Martin released “Livin’ la Vida Loca”, which helped him attain enormous success worldwide; it is generally seen as the song that began the Latin pop explosion of 1999 and made the transition easier for other Spanish-speaking artists to move into the English-speaking market. Since its release, the song has sold over 8 million copies, making it one of the best selling singles of all time. His first English-language album (also titled Ricky Martin), has sold 22 million copies and is one of the best selling albums of all time. His other studio albums include: Me Amarás (1993), A Medio Vivir (1995), Vuelve (1998), Sound Loaded (2000), Almas del Silencio (2003), Life (2005), Música + Alma + Sexo (2011), and A Quien Quiera Escuchar (2015). In 2018, he portrayed Antonio D’Amico on The Assassination of Gianni Versace: American Crime Story for which he received a nomination for the Primetime Emmy Award for Outstanding Supporting Actor in a Limited Series or Movie. – Wikipedia Meghan Elizabeth Trainor (born December 22, 1993) is an American singer-songwriter known for her singles “All About That Bass” and “Lips Are Movin”.

Interested in music from a young age, Trainor wrote, recorded, performed, and produced three independently released albums between ages 15 and 17. In 2011, she signed a publishing deal with Big Yellow Dog Music as a songwriter, before she was offered a deal with Epic Records. Her debut single, “All About That Bass”, was released in June 2014 and reached number one on the Billboard Hot 100, ultimately selling 11 million copies internationally. Her Epic debut, Title (2015), was supported by three other singles: “Lips Are Movin”, “Dear Future Husband” and “Like I’m Gonna Lose You”. She followed this up with Thank You (2016).

Trainor is influenced by 1950s and 1960s music and is known for her throwback style. Her lyrics frequently refer to modern womanhood, body image, and empowerment. She has received several awards and nominations including a Grammy Award for Best New Artist in 2016, four ASCAP Pop Music Awards, and two Billboard Music Awards. – Wikipedia

Christopher Hamill (born 19 December 1958), better known by his stage name Limahl (an anagram of Hamill), is an English pop singer. He rose to fame as the lead singer of the 1980s pop group Kajagoogoo, before embarking on a briefly successful solo career, which reached its peak with the 1984 hit “The Never Ending Story”, the theme song for the film of the same name. – Wikipedia

The RadioMaxMusic Christmas Channel is pleased to share tunes from Lindsey Stirling at 2:00 pm! You can listen at RadioMaxMusic Channel 4, the Online Radio Box, or at TuneInRadio.

We complete our look at Boy Bands with Westlife.

Westlife are an Irish pop vocal group, which formed in 1998 in Dublin, disbanded in 2012 and reunited in 2018. They were originally signed by Simon Cowell in the UK, Clive Davis in the US and managed by Louis Walsh and Sonny Takhar. The group currently consists of Nicky Byrne, Kian Egan, Mark Feehily, and Shane Filan.

The group rose to fame with their debut international self-titled studio album, Westlife (1999). Followed by Coast to Coast (2000), World of Our Own (2001), Unbreakable – The Greatest Hits Vol. 1 (2002) and Turnaround (2003) which continued the group’s success worldwide. Before the start of their Turnaround Tour in 2004, one of the original line-up member Brian McFadden departed from the band. The four remaining members continued as a group to release their cover albums Allow Us to Be Frank (2004) and The Love Album (2006) and the studio albums Face to Face (2005) and Back Home (2007). After of almost a one-year hiatus of studio recording in 2008, they regrouped and released the studio albums Where We Are (2009), and Gravity (2010) and the compilation album Greatest Hits (2011). After eight years, the quartet group will release their eleventh studio album in 2019 with its first single “Hello My Love” to be released on late-2018 and new singles from 2019 onwards. – Wikipedia