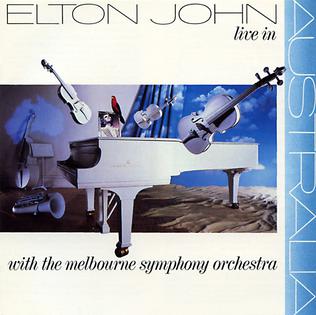 The concert, recorded on 14 December 1986, was the last of a series of concerts done throughout the last two months of 1986, which were part of John’s Tour De Force (tour) of Australia and New Zealand. The concerts consisted of two sets: the first was limited to John and his 14-piece band, including backing vocalists and the Onward International horn section, and his flamboyant stage dress, featuring Mohawk and Tina Turner wigs and some outlandish eyewear; the second featured John, the band and the 88-piece Melbourne Symphony Orchestra, with him dressed as Mozart.

John’s band was essentially the lineup used on Leather Jackets, which he was touring behind at the time, including Jody Linscott and special guest Ray Cooper, both of whom played percussion.

James Newton Howard, who was at the time an up-and-coming film composer in Hollywood, joined John to conduct and write larger, augmented charts of not only his own previous work on “Tonight,” but also Paul Buckmaster’s original arrangements, since the music was to be played by 88 musicians, instead of the smaller studio orchestra for which the compositions were originally designed. He also wrote brand new full orchestra parts for songs such as “Don’t Let the Sun Go Down on Me”, which previously only had horn arrangements.

The album features most of the songs recorded in the second half of the show, excluding “Saturday Night’s Alright for Fighting”, “Carla/Etude”, “Cold as Christmas (In the Middle of the Year)” and “Slow Rivers”, which was sung by John alone (John dueted “Slow Rivers” with Cliff Richard on Leather Jackets).

John’s live sound engineer, Clive Franks, handled the recording of the band (assisted by Keith Walker and Dennis Fox), while album producer Gus Dudgeon supervised recording of the orchestra by Leon Minervini and Nic Jeremy. Dudgeon took the tapes back to Wisseloord Studios in the Netherlands for mixing with engineer Graham Dickson, who had also worked on Leather Jackets.

This concert was the last to feature Elton’s legendary stage costumes, which he had featured in his shows since the early 1970s. It was also his last show before undergoing throat surgery in January 1987. Despite being completely successful, the surgery prevented Elton from singing and touring for several months and permanently altered his voice.