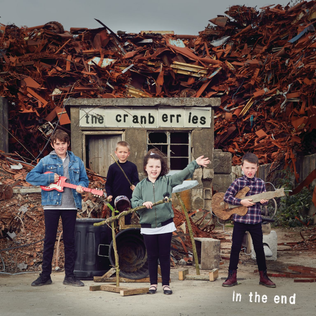 In the End is the eighth and final studio album by Irish alternative rock band The Cranberries, released on April 26, 2019 by BMG. It is the band’s first release since the death of singer Dolores O’Riordan, whose vocals are featured posthumously. The surviving instrumentalists pieced together her demos with in-studio recordings over the course of the subsequent year and worked with long-time producer Stephen Street to finalise the album. Critical reception has been positive.

Guitarist Noel Hogan and vocalist Dolores O’Riordan began composing songs for the album while on tour in May 2017; the first track that Hogan wrote was “A Place I Know” while touring in Poland. The band ended up canceling several North American tour dates when O’Riordan suffered a herniated disc. That June, Hogan spent time in France writing and sending his demos to O’Riordan in New York City to add lyrics. Together they wrote and demoed 11 songs that winter, with the final emails from O’Riordan arriving to Hogan hours before she died. The surviving bandmates set aside her vocals for several months following her death and after getting the full support from O’Riordan’s family, they brought in Stephen Street—who produced several of their early albums—to complete the recording sessions in April and May. The voice of Dolores O’Riordan has not been retouched by the Auto-tune but required the addition of backing vocalist Johanna Cranitch to fill few holes in the demos. Cranitch had toured with the band in 2012. By October 2018, the recordings were complete. A month earlier, Noel Hogan confirmed that the Cranberries moniker will be retired after the album’s release.

The album’s cover image was taken by the band’s original photographer Andy Earl and sleeve designer Cally Calloman. On the first anniversary of her death, “All Over Now” was released as a streaming advance single. The song debuted at 25 on the Adult Alternative Songs. On 1 March, they released “The Pressure” for digital streaming, followed by a music video for “All Over Now” on 7 March. “Wake Me When It’s Over” debuted on 19 March. Lastly, the title track was made available on 16 April.

For many of the tracks, the first time they were performed in studio was also the last: the surviving band members had no intentions on performing them live prior to the album’s release.