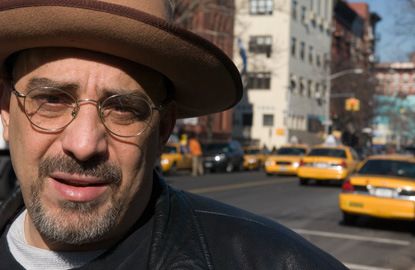 Pat DiNizio (October 12, 1955 – December 12, 2017) was the lead singer, songwriter, and member of the band The Smithereens, which he formed in 1980 with Jim Babjak, Dennis Diken and Mike Mesaros, from Carteret, New Jersey.

In 2000, DiNizio made an unsuccessful run for the New Jersey seat of the United States Senate, running on the Reform Party ticket. He finished 4th with 19,312 votes (0.64%). The campaign was chronicled in the 2001 documentary film Mr. Smithereen Goes to Washington.

The same year, he launched the “Living Room Tour,” a five-month jaunt where he performed solo, by request only, in the homes of fans. The tour was a success, and he occasionally did similar concerts for a nominal fee.

In 2001, DiNizio was one of the first musicians to throw his support behind XM Satellite Radio, becoming host and program director for the XM Radio Unsigned station. He was also an inaugural member of the Independent Music Awards’ judging panel to support independent artists.

In 2006, he was the focus of 7th Inning Stretch, an ESPN2 reality special. The special focused on DiNizio’s recovery from a “life-threatening and debilitating nervous disorder” by training and attempting to try out for a Minor League Baseball team (The Somerset Patriots), along with tales of baseball folklore from other musicians such as Joan Jett, Gene Simmons, and Bruce Springsteen.

DiNizio also released an audio book, Confessions Of A Rock Star, and continued to perform both solo acoustic shows and with The Smithereens. From November 2011 to June 2012, DiNizio presented a condensed, live adaptation of the book (with storytelling and full band accompaniment) in nightly performances at the Riviera Hotel & Casino in Las Vegas.

DiNizio died on December 12, 2017. According to bandmates, his health declined following a series of health issues that began in 2015 after a pair of falls that resulted in nerve damage which limited the use of his right hand and arm.  Wikipedia