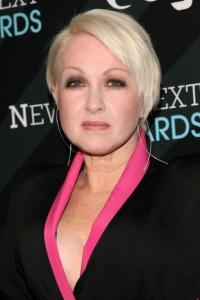 Cynthia Ann Stephanie “Cyndi” Lauper (born June 22, 1953) is an American singer-songwriter, actress, and LGBT rights activist whose career has spanned over four decades. Her debut solo album She’s So Unusual (1983) was an instant commercial success. The album was the first debut female album to chart four top-five hits on the Billboard Hot 100—”Girls Just Want to Have Fun,” “Time After Time,” “She Bop,” and “All Through the Night,” earning Lauper the Best New Artist award at the 27th Grammy Awards in 1985. Her success continued with the soundtrack from the motion picture “The Goonies” and her second record, True Colors (1986), which included the number one hit of the same name, and “Change of Heart,” which peaked at number 3 and earned Lauper two nominations at the 29th Grammy Awards in 1987.

Lauper has been celebrated for her ongoing humanitarian work over the last 30 years, particularly as an advocate for gay and transgender rights in the U.S. Her charitable efforts were recognized in 2013, when the singer was invited as a special guest to attend President Barack Obama’s second-term inaugural ceremony. – Wikipedia