No Doubt is an American rock band from Anaheim, California, that formed in 1986 consisting of vocalist Gwen Stefani, guitarist Tom Dumont, bassist Tony Kanal, and drummer Adrian Young. Since 1995, following the departures of keyboardist Eric Stefani and the band’s horn section, they have been supported by keyboardist and trumpeter Stephen Bradley and keyboardist and trombonist Gabrial McNair in live performances. The ska sound of their first album No Doubt (1992) failed to make an impact. The Beacon Street Collection (1995) is a raw expression of their sound, inspired by ska punk and released independently by the band under their own record label. The album sold over 100,000 copies in 1995, over three times as many as their first album sold. The band’s diamond-certified album Tragic Kingdom (1995) helped launch the third-wave ska revival of the 1990s, and “Don’t Speak”, the third single from the album, set a record when it spent 16 weeks at the number one spot on the Billboard Hot 100 Airplay chart.

The group’s next album, Return of Saturn (2000), despite the Top 40 hit single “Simple Kind of Life”, did not match the success of their previous but received critical praise and was nominated for Best Rock Album at the 43rd Grammy Awards. 15 months later, the band reappeared with Rock Steady (2001), which incorporated reggae and dancehall music into their work. The album was primarily recorded in Jamaica and featured collaborations with Jamaican artists Bounty Killer, Sly and Robbie, and Lady Saw. The album produced two Grammy-winning singles, “Hey Baby” and “Underneath It All”. On 22 November 2002, No Doubt received the Key to the City of Anaheim, given by the Mayor of Anaheim, Tom Daly in Disneyland during the band’s appearance on ‘Breakfast with Kevin and Bean’ (KROQ-FM) where they performed 5 songs. After 2004 tour the band embarked on solo projects, with Gwen Stefani releasing two successful solo albums Love. Angel. Music. Baby. (2004) and The Sweet Escape (2006) while Tom Dumont released his own solo music project, Invincible Overlord. In 2008, the band resumed working slowly on their sixth effort, titled Push and Shove (2012), and released their single “Settle Down”. They have sold over 33 million albums worldwide. 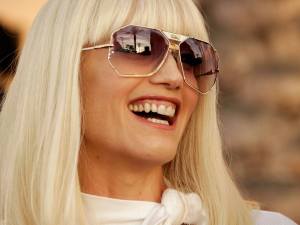 Gwen Renée Stefani (born October 3, 1969) is an American singer-songwriter, fashion designer, and actress. She is the co-founder of and lead vocalist for the rock band No Doubt. Stefani recorded Love. Angel. Music. Baby., her first solo album, in 2004. Inspired by music of the 1980s, the album was a success with sales of over seven million copies. The album’s third single, “Hollaback Girl“, was the first US digital download to sell one million copies. Stefani’s second and final solo studio album, The Sweet Escape (2006), yielded “Wind It Up”, “4 in the Morning”, and the highest-selling single “The Sweet Escape”. Including her work with No Doubt, Stefani has sold more than forty million albums worldwide.

She won the World’s Best-Selling New Female Artist at the World Music Awards 2005. In 2003, she debuted her clothing line L.A.M.B. and expanded her collection with the 2005 Harajuku Lovers line, drawing inspiration from Japanese culture and fashion. Stefani performs and makes public appearances with four back-up dancers known as the Harajuku Girls. She married British musician Gavin Rossdale in 2002 and they have two sons: Kingston James McGregor Rossdale, born May 26, 2006, and Zuma Nesta Rock Rossdale, born August 21, 2008. Billboard magazine ranked Stefani the fifty-fourth most successful artist and thirty-seventh most successful Hot 100 artist of the 2000–09 decade.  (Source: Wikipedia)