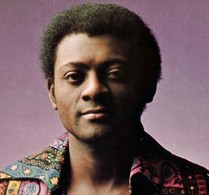 Joe Simon (born September 2, 1943) is an American chart-topping, Grammy Award winning, soul and R&B musician. Amongst other chart singles, Simon secured three number one hits on the US Billboard R&B chart between 1969 and 1975.

Simon was born in Simmesport, Louisiana, United States. Similar to many other African-American artists from the era, Simon began singing in his father’s Baptist church. He pursued his vocal abilities full-time once the family moved to Richmond (near Oakland, California) in the late 1950s. There Simon joined the Golden West Gospel Singers and became influenced by Sam Cooke and Arthur Prysock. With this, the group decided to turn secular and recorded “Little Island Girl” as the Golden Tones in 1959.

Hush Records label owners Gary and Carla Thompson urged Simon to record on his own, and in 1964 Simon scored considerable success on the Vee-Jay label with “My Adorable One”. Simon scored again in 1965 on the Chicago based label with “Let’s Do It Over”, which landed a #13 spot on the US Billboard R&B chart. However, the Vee-Jay label folded soon after the latter song’s release and Simon found himself traveling across the country singing.

Simon caught the eye of Nashville, Tennessee, R&B disc jockey John Richbourg during this time, and Richbourg not only became Simon’s manager/record producer but also brought the singer to Monument Records’ subsidiary label Sound Stage 7 in 1966. That year Simon released “Teenager’s Prayer”, which peaked at #11 on Billboard’s R&B chart. Within the next two years, Simon released a string of hits: “(You Keep Me) Hanging On”, “The Chokin’ Kind” (Billboard Hot 100 #13), “Farther On Down The Road”, and “Yours Love”. “The Chokin’ Kind” was written by Harlan Howard, spent 12 weeks in the charts, and had sold one million copies by 16 June 1969. In addition, Simon was given a Grammy Award in 1970 for Best Male R&B Vocal Performance. Source: Wikipedia